Start a Wiki
Lola Luftnagle (originally "Lola LaFonda") is the alter ego of Lilly Truscott which she uses as a disguise when attending celebrity events where Miley is dressed as Hannah.

In order to help Miley keep her secret, Lilly attends all Hannah Montana events wearing a disguise and posing as Hannah's companion and assistant "Lola Luftnagle". Lilly first comes up with the name "Lola LaFonda" for her alter ego in the episode Miley Get Your Gum, but she would later settle on Luftnagle in It's My Party, and I'll Lie if I Want To and that name is used in all subsequent episodes. Lilly claims that Lola is the "daughter of oil baron Rudolph Luftnagle, [and] sister of socialites Bunny and Kiki Luftnagle."  She describes herself as "(Hannah's) brilliant friend Lola" , being a "sophisticated international jetsetter" . When Lola is too excited to talk, she emits a distinctive, high-pitched Eep-sound. Lola likes to eat shrimps and sushi.

In the first two seasons, Lola's celebrity crush is Orlando Bloom. This is even referenced in the show's title song The Best of Both Worlds. In The Test of My Love, Lola fills in for Hannah at Traci's "Putt-Putt for puppies charity event", ruining it completely when she spots Orlando Bloom and goes after him, yelling "Orlando! You don't understand! We're meant for each other! You can't run away from destiny!", whereas in season 3, she refers to him as "Snorlando Bloom" . Lola is not dating Mike as said in He Could Be the One. Instead she is dating Justin Timberlake, according to an Internet rumor she has "no idea" who started it.

Lola loves dogs. In Miley Get Your Gum she holds a dog named Thor (who is never to be seen again), and in Miley Hurt the Feelings of the Radio Star, Hannah and Lola attend the "Animal Rescue Foundation", where Lola gets handed over a dog as soon as she enters the studio, saying: "Oh look! It's a little Lola dog for Lola! Hello, who's the little Lola? Who's the little ... Oh. You're a little leaky Lola." This is interesting because normally Lola is ignored completely by other people.

Sometimes, Lilly gets a little upset because the times Miley has told people she is Hannah Montana, Lilly says she is Lola Luftnagle, and people say, "Who's Lola?" In I'll Always Remember You, Lilly says: "(Siena) didn't know who Lola was! Look at me! I wear Day-Glo wigs, I dress like a Japanese cartoon character! How can she not know who Lola is? (...) Lola's real to me."

In Season 4, when Miley finally showed the world her secret, Lilly also took off her wig for the last time.

Lola wears a lot of jewelery like rings, necklaces, huge earrings and bangles together with a brightly colored wig. In season 1, the hair colors are red, purple, bright blue and orange. In season 2 we can see red, rose, white, purple, and pink wigs, most of which are short. In the seasons 3 and 4, the wigs are longer than in the first two seasons. The colors change from blue to purple, rose, pink and white. Also in season 3 and 4, Lola is wearing high heels from time to time. On some outfits the letter "L" can be seen.

Emily Osment has said that she has over 80 wigs for Lola, and that her personal favorites are the purple and white wigs. She also said in a backstage interview that Lola has some very tight pants that are impossible to sit in, and that she is more like Lola than Lilly. She also stated in an interview that she loves Lola's clothes[ and just wants to keep them. Ashleigh and Molly Luftnagle, Ashleigh played by Emily Osment and Molly played by Miley Cyrus, are not any relation to Lola.

References by other characters

Also in Everybody Was Best Friend Fighting, Colin Lasseter refers to Lola as "Cutie with the tomatohead". 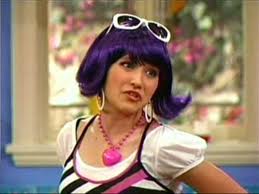 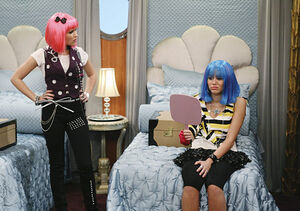 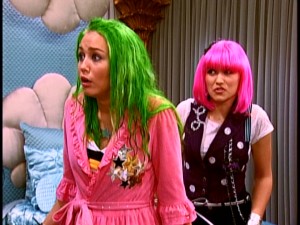 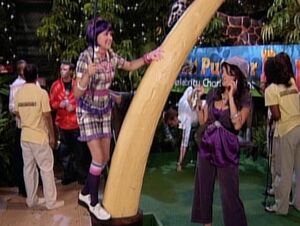 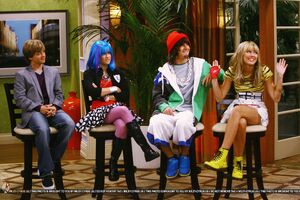 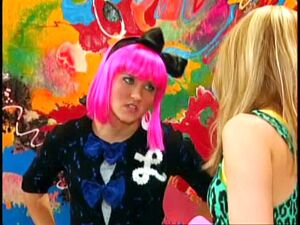 Add a photo to this gallery
Retrieved from "https://hero.fandom.com/wiki/Lola_Luftnagle?oldid=1858091"
Community content is available under CC-BY-SA unless otherwise noted.