To stop villainous teams and organizations

Looker (known as "Handsome" in Japan) is the international police and criminal investigative intentions hero in Pokémon games, Pokémon TV series, and in Pokémon Adventures.

"Looker" is a codename; his real name is unknown. In the Sinnoh Region, Looker explained Team Galactic's plans in the games and in the anime. He also appears in the manga.

In the anime, Looker met Ash, Dawn and Brock, and he helped them many times. And at last Team Galactic was defeated, and Sinnoh was saved. And later in Unova Region he met Ash again, and Iris and Cilan, and they wanted to help him when Team Plasma was caused trouble in Unova. Later in White Ruins when Team Plasma was awakening Reshiram, Looker, Ash, Iris and Cilan were there to preventing their intention to control the whole world. And at last Team Plasma was defeated too, and Unova was saved, and after that Looker arrested all members of the Team Plasma, not only does not N, Anthea and Concordia. And Looker knew that he and Ash would meet again.

He appears in the manga and one of Platinum's allies. He first appear in the Diamond & Pearl arc, and later he appears in the Platinum arc, where he joins Platinum in her quest to research information on the Distortion World so that she can rescue her bodyguards. 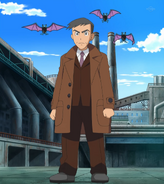 Looker, as he appears in the anime

Looker with Jessie, James and Meowth