Lord British made its debut in Salamander/Life Force. It is controlled by Player 2. It is the second ship in the Gradius series which is controlled by the Player. Lord British has other names which are Lord. B or Road British, the latter as a result of romanization. It has red streaks intead of blue steaks and has a different shape than Vic Viper. It is in the shape of a Jet.

Somewhere away from the planet Gradius, another benevolent planet called Latis was at a state of beauty with sparkling blue oceans. But for years an ancient prophecy spelling potential doom has haunted its inhabitants: that light-years away, a giant dragon born from the sea of flames (an unnamed star) would consume the planet into external darkness.

That prophecy seemingly came true when the Bacterian Empire under the guise of the Salamander Army invaded the planet and overwhelmed the Latis Army. Unwilling to face defeat, the prince of Latis took charge of the fight and flew the starfighter Lord British straight into the heart of the enemy's mother star alongside the Gradius Empire's Vic Viper.

Both ships tracked down and destroyed numerous enemy commanders including the Brain Golem, Tetran, and Death, before locating and destroying the Zelos Force. In doing so, both the Vic Viper and Lord British save planet Latis from an inpending doom, and drive back the Bacterians.

Years later, Lord British, alongside the Vic Viper, the Jade Knight, and the Falchion Beta were summoned to destroy an unknown enemy luring within the unknown and dangerous Black Nebula. With an updated set of weapons, Lord British and the other fighters were able to track down the source and destroying it whilst narrowly escaping destruction, saving Gradius in the process and bringing an end to the Bacterian Empire once more.

Lord British has a virtually identical weapon arsenal to the Vic Viper in Salamander/Life Force, however in Gradius Gaiden, its weapon set is unique, as it uses a weapon set accustomed to destroying multiple Bacterians at once in exchanged for inferior firepower and a slower fire rate. 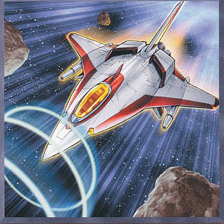 Retrieved from "https://hero.fandom.com/wiki/Lord_British?oldid=2034449"
Community content is available under CC-BY-SA unless otherwise noted.