Lorraine Warren is one of the main protagonists of The Conjuring horror film series. She and her husband Ed Warren are paranormal investigators dedicated to rid the world of ghosts and demons

Lorraine, as a child, grew up discovering she was psychic and clairvoyant, beginning when she saw an angel in a hospital. Despite no one believing her and being mocked by her peers, Lorraine grew to harness her gift, which she believed was a gift from God.

She is portrayed by Vera Farmiga.

Lorraine, as a child, grew up discovering she was psychic and clairvoyant, beginning when she saw an angel in a hospital. Despite no one believing her and being mocked by her peers, Lorraine grew to harness her gift, which she believed was a gift from God.

Ed and Lorraine met as adults, and were eventually married. Together, they began a crusade to help others dealing with the paranormal, becoming paranormal investigators and demonologists. They opened the Warren's Occult Museum, a sealed-off area of their house where they stored cursed, possessed, and ritualistic objects so that they could never be used to do harm again. They investigated hundreds of cases, and eventually had a daughter named Judy. Sometime during this period, they had their first encounter with a certain demon that would prove to be their worst enemy: a demonic nun that shows Lorraine a vision of Ed's gruesome death, which frightens and saddens Lorraine so much she locks herself away for eight days afterwards.

They were eventually called to investigate a doll that was supposedly possessed. After sensing the evil spirit latched onto the doll, called Annabelle, the Warrens took it immediately to lock it away. Even when the demon summoned ghosts to attack and almost kill Ed, they still managed to get it home and lock it in a case made of holy glass.

While doing a demonstration in Rhode Island, the two are asked to investigate a haunted farmhouse in Rhode Island. They agree, and find that the house is indeed haunted, but that they need proof to request an exorcism from the Vatican. They decide to help the struggling family as much as they can, bringing in state-of-the-art equipment, helping the family with household chores and tasks, encouraging them to remember good memories, as well as doing research on the property. When the children of the family are attacked by the ghost, Ed and Lorraine step in to help fight it back, and Lorraine even keeps going even after injuring herself.

After collecting all the evidence that the house is haunted by the ghost of a witch named Bathsheba, the ghost goes and tries to attack Judy, trying to kill her with a chair. Ed saves her, and they realize that the family is in too much danger to wait for the Vatican. They race back to the house in time to stop the ghost (who has possessed the mother) from killing the children, and Ed performs a long, but ultimately successful exorcism that defeats Bathsheba and saves the family.

After an incident where a friend of their daughter accidentally lets Annabelle (as well as other spirits) out, but manage to re-contain them, Ed and Lorraine hold no ill will towards her and forgive her, and Lorraine even ensures the girl that her recently deceased father sill loves and cares for her.

Ed and Lorraine then go investigate the infamous Amityville house, and Lorraine discovers that the demon nun was behind the mass murder that occurred there and the subsequent haunting. With the nun back in their lives and again showing her visions of Ed's death, Lorraine wants to stop taking cases in order to keep him safe. However, a haunting in Enfield, England is too dangerous to be ignored, so they go there to again collect proof. Despite the media and skeptics pointing out that the haunting has to be a hoax, the Warrens trust the family regardless and stay to help them. When Ed learns that the family's patriarch left them and took all of the records and music, he decides to lift their spirits by playing the guitar and singing for them, encouraging the children to fight back against the evil haunting them. When one of the children, Janet, is oppressed by the spirit and attacked, Ed saves her, and Lorraine calms her with stories about her childhood.

Again, Ed and Lorraine do everything they can to help out the family, including doing chores and repairs on the house. However, after an incident where it appears that Janet had been faking everything, Ed and Lorraine still continue to believe the family's claims, but admit that the church will not. The mother throws them out, but they then figure out that the spirit that had been haunting the home was just an enslaved pawn, and that the real villain was the demon nun. Ed and Lorraine rush back to save Janet from the demon. Ed bursts into the house, but Lorraine begs him to wait for her so she can keep him safe from the death she foresaw in her visions. Ed, despite knowing that his life was at risk, rushed to help Janet anyway, and even continued after the demon used scalding steam to blind him and attacked him. Lorraine figures out that they need the demon's name to defeat it, and realizes that she had heard it in one of her previous visions: Valak.

Lorraine manages to get in just in time, using Valak's name to send it back to Hell. She helps Ed up, and Janet is saved. Afterwards, Ed gives Janet the same crucifix he had used against the evil entity under his bed when he was a child. The two return home, and celebrate Christmas dancing together. 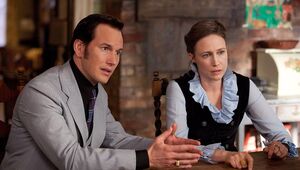 Retrieved from "https://hero.fandom.com/wiki/Lorraine_Warren?oldid=1857384"
Community content is available under CC-BY-SA unless otherwise noted.