Lotsa Heart Elephant is one of the strongest members of the Care Bears/Cousins of the Forest of Feelings.

She is a pink elephant with a matching Belly badge that resembles an old-style hand weight with a heart on each side.

Though small by elephant standards, Lotsa Heart makes up for her lack of stature with copious amounts of determination and aplomb. Despite being known as the strongest creature in the Forest of Feelings, she is sometimes chastised for her lack of coordination and athletic talent by her fellow Cousins. However, she has more than once demonstrated that "lotsa" heart is sometimes all you need to come out on top. Her catch phrase is "...and that's the truth!", which is usually added to the end of her (and sometimes others) sentences.

Though she has a tendency to get over-excited (usually followed by a boisterous trumpet from her trunk), her "slow and steady" philosophy usually prevails in times of trouble. 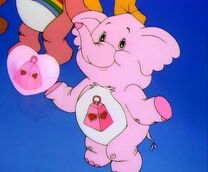 Retrieved from "https://hero.fandom.com/wiki/Lotsa_Heart_Elephant?oldid=1593910"
Community content is available under CC-BY-SA unless otherwise noted.