Lotte Jansson is one of the main protagonists of Little Witch Academia. She is a witch from Finland and also Atsuko "Akko" Kagari and Sucy Manbavaran's classmate at Luna Nova Academy.

Lotte is a girl of short height. She has short orange hair secured by navy blue head band and turquoise blue eyes. She has pale skin complexion, and freckles on her cheeks and nasal bridge. She has semi-rimless glasses with red frames and large, round lenses with a strong prescription that heavily distorts her eyes. She wears the standard Luna Nova Academy uniform with a red belt and a red band on her hat. When not in her school uniform, she also wears a mauve headband.

Lotte is shy, calm and polite girl, who rarely getting angry. Lotte is a kind-hearted girl who earnestly looks after Akko. Lotte is concerned with Akko's well-being given that her determination to become a witch like Shiny Chariot sometimes made her go too far and that she would forget the well-being of others who wish to help her.

There are occasions when she does get angry. Her patience in aiding Akko was eventually tested where the latter accidentally rips up the sheet music to Lotte's ancestral song. Lotte becomes upset so much that she becomes sullen and even colder than she normally was, as Sucy pointed out. In spite of this, she still considered Akko as her friend and supported her determination to become a witch like Shiny Chariot in spite of the said witch's sad reputation, as seen when she forgave Akko by giving her a handmade replica of Shiny Chariot's hat. On another occasion when Diana and her team continued to belittle them particularly towards Akko, Lotte fiercely defended her friend's absence and loudly berates the group for continuously harassing them, leaving those present shocked at the change of her once quiet persona.

Lotte has shown to be a big fan of Night Fall.

Magic: As a witch-in-training, Lotte possesses average skills in magic, with her signature ability being communicating with faeries and spirits as well as synchronizing her magic with that of theirs to access more powerful spells. 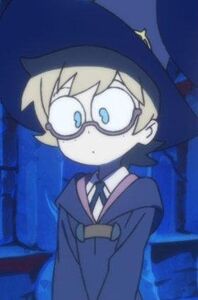 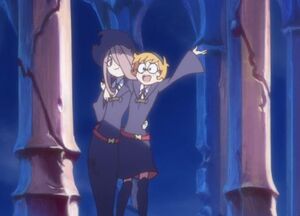 Akko with Lotte and Sucy. 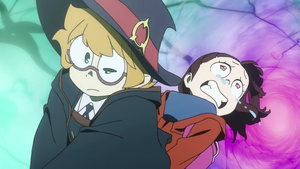 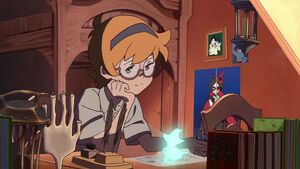 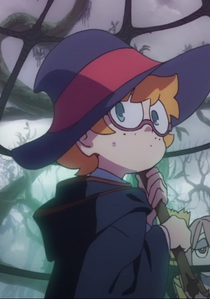 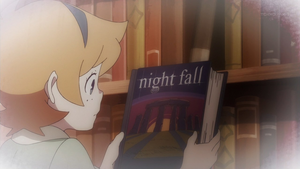 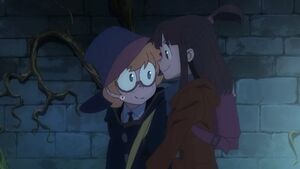 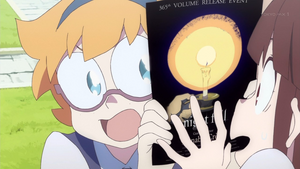 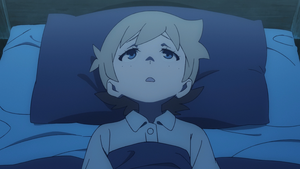 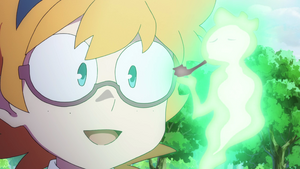 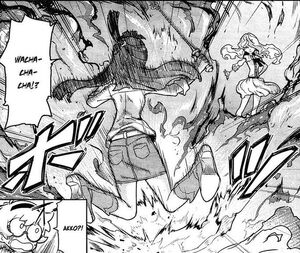 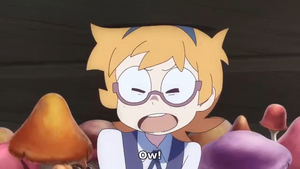 Lotte hit her head on the roof 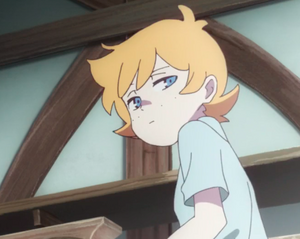 Retrieved from "https://hero.fandom.com/wiki/Lotte_Jansson?oldid=1718572"
Community content is available under CC-BY-SA unless otherwise noted.