Lou is the main protagonist of Cats & Dogs, and a supporting character in Cats & Dogs: Revenge of Kitty Galore. He is an adopted pet of the Brody family.

He is a beagle.

Lou is known as a level-headed, optimistic, understanding, kind-hearted, instructive, dignified, loyal, outgoing, unselfish, knowledgeable, independent and determined beagle who wants to team up with his friends.

At a farm, a handful of Beagle puppies make fun of a younger puppy, who wants to be free. The younger puppy tries an escape, but he fails. A group of young black Doberman puppies, all of them trained dog agents, led by a large Doberman Pinscher appear, round up the Beagle puppies and force them into hiding underground. Mrs. Brody comes into the puppy pen and she selects the younger puppy who was forgotten by the Dobermans. She decides to adopt him and takes him home, naming him Lou after Scotty sarcastically suggests the name "Loser".

Lou goes near an explosive trap set by the cats but Butch comes out and detonates it harmlessly. Butch then shows Lou the network that dog agents use, then takes him to meet some more agents: Peek, Sam. Having mistaken Lou for a trained dog agent, Butch raises his concerns to his superiors, but is told that there is no time to send a replacement. Lou is then briefed on the origins of the war between cats and dogs, which apparently dates all the way back to Ancient Egypt. Butch also mentions that Buddy managed to escape from the cats and retired from the spy business, living life in a condominium.

When Mr. Tinkles sends in the Devon Rex ninjas but Lou manages to prevent the theft. Lou then meets a former agent and Butch's ex-sweetheart and girlfriend named Ivy, a Saluki who belly scratches him.

Kennelkoff frames Lou for defecating in the house with a ball containing fake dog feces, causing Lou to be confined outside, then places a bomb on the lab door. Butch and Lou manage to get into the house through the window, Lou then distracts the Russian while Butch tries to disable the bomb, but Kennelkoff turns his attention on Butch and tries to kill him.

After an incident involving Lou playing with Scotty, Professor Brody's machine finally gets the positive combinations for the formula. One day when Mr. Tinkles kidnaps the Brody family and threatens to kill them if he does not give them Professor Brody's formula, Lou feels deeply wounded waiting with his boss Butch to save them, however
when the dogs are unable to give up the formula after the meeting of the world's dogs, Lou angrily confronts Butch for not helping him. Butch then explains that when his owner went to college, he left him with his grandmother and storms off, cutting off all of Lou's communications with Peek and the others, so Lou would not seek help to save his family. Lou gives in and brings Mr. Tinkles the research, and is betrayed. Butch manages to find the depressed Lou and, along with Ivy, the two stage an ambush of Mr. Tinkles's factory where the latter plans to use mice to spread the now mass-produced allergy to dogs. While Butch, Ivy, Peek and Sam fight Tinkles's cat forces, Lou frees the Brodys and Calico (who was betrayed by Tinkles), revealing he can speak in the process. Lou defeats Tinkles and rescues Butch, but the claw of the excavator hits his head and a flocking tank, causing an explosion that destroys the factory. Butch manages to save Lou and he tells him he was right about everything, but the puppy is unresponsive and seems to be dead.

After a few hurtful moments of sadness and sorrow, Lou suddenly awakens, and all rejoice. Lou decides to be a normal canine and not a secret agent yet, but one day he will be when he is a full-grown beagle.

Butch and Lou, now a fully grown Beagle and the head of D.O.G. HQ, watch Diggs blowing up the car dealership. Lou wants to recruit Diggs as an agent, and Butch reluctantly agrees. 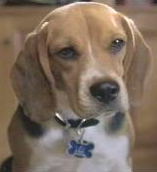 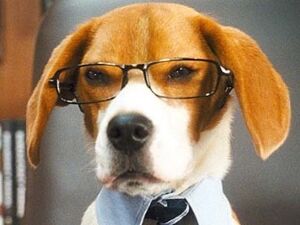 Adult Lou in Cats & Dogs: The Revenge of Kitty Galore.