Rid the street of crime

Lou speaks more than his counterpart Eddie. Even though he rarely comes up, when he does he is in a police uniform. Lou once said he wants to leave the force as there is more money in private security; nothing ever becomes of this, though. His favorite on duty beverage is beer.

He once joined a grunge band with Homer, Lenny, and Carl called "Sadgasm", in which he played the drums. They broke up later. His unintelligible joy is hot and cold running chicks.

Lou and his fellow officer Eddie do not have last names. This was revealed in the episode "The Frying Game" (Season 13, Episode 21) where the following transcripts are taken from:

Wiggum: And I'm gonna be in the show.
Carmen: Yes.
Wiggum: Can Ed and Lou have producer credits?
Carmen: Yes.
Guy: Now what are your last names?
Lou: We don't have them. We're like Cher.

He also was unintentionally instrumental in exposing to Chief Wiggum that Groovy Grove Juice Corporation's latest shipment had been laced with Peyote, where he ended up spinning around in a ecstatic manner and rambling about a monkey grabbing his "brain banana" in a half-lucid state (obviously hallucinating from the juice's effects), causing Wiggum to become suspicious of the juice he was drinking and taste it for anything out of the ordinary.

Even though he's never stated so explicitly, other people around Springfield have insinuated that he is a graduate of Princeton University. Following his undergraduate career, Lou applied and was accepted to law school at an unspecified university, but was forced to drop out as he could not afford the college tuition. His talents are abusing power and intimidating suspects.

Lou was married to a woman named Amy, but later divorced. He complains occasionally that Eddie has been seeing his ex-wife, making Commissioner Wiggum act as mediator. Lou became the temporary owner of Santa's Little Helper, who was trained to be a police dog. At around this time, it was revealed that Lou has a girlfriend named Charquelle who had wanted to party with him. Lou also has an unnamed son who lives in Baltimore. 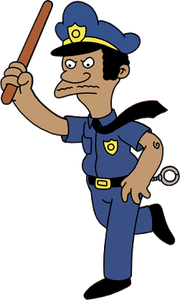 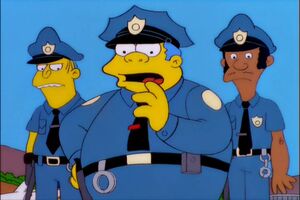 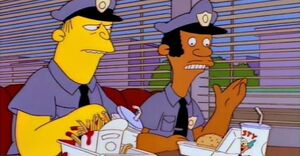