Soldier in the war, a cook, a repairman for small appliances, and a detective

Playing with his grandsons and the other babies, watching TV, fishing, sleeping

Older Man
Stuart Louis "Lou" Pickles Sr. (Born February 28, 1926) is the father of Stu and Drew Pickles, also the grandfather of Tommy Pickles, Dil Pickles and Angelica and the father-in law of Charlotte and Didi Pickles and the husband of Trixie Pickles.

The elder patriarch of the Pickles family, young at heart, he likes to be adventurous. He was a Private First Class during in World War II.

Occasionally, he flirts with women. He is commonly thought of as having a wild imagination from the many stories he tells of his earlier years. In the early episodes, he was voiced by the late David Doyle. After Doyle's death, the late Joe Alaskey voices Lou Pickles in the later episodes until the end of the series.

Lou Pickles has gray hair and is often shown wearing a purple shirt and a green vest. He looks just like his son Drew Pickles when he was younger, but as he got older, he now looks more like his other son Stuart Pickles. 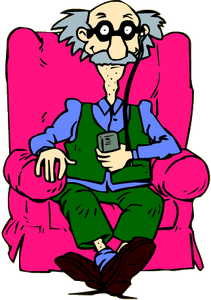 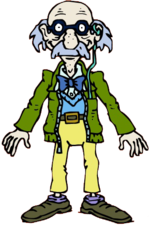 All Grown Up Grampa Lou Pickles 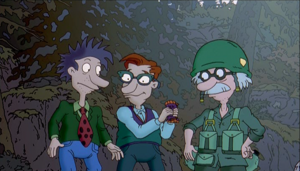 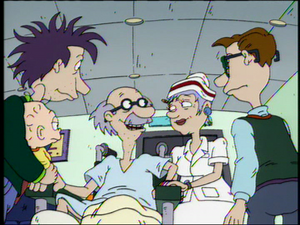 Retrieved from "https://hero.fandom.com/wiki/Lou_Pickles?oldid=1901072"
Community content is available under CC-BY-SA unless otherwise noted.