Looking for Gage
Being with his family
Hanging with Jud Crandall

Louis Creed is the main protagonist of the Stephen King novel and horror movie Pet Sematary, and its 2019 remake. A doctor moving to a new town, he suffers from a tragedy that leaves him making a tough choice to resurrect his dead child.

He was portrayed by Dale Midkiff in the 1989 film, and by Jason Clarke in the 2019 remake. Clarke also portrayed Malcolm in Dawn of the Planet of the Apes, and John Connor/T-3000 in Terminator: Geniysis.

Louis moves to Ludlow, Maine, along with his wife Rachel, their children Ellie and Gage and Ellie's cat, Wiston Churchill (Church for short). They quickly befriend their new neighbor, Jud Crandall, expecially Louis who sees Jud as a surrogate father. However, the Creeds have all traumatic experiences during their first weeks in Ludlow: Ellie, after visiting the "pet sematary", is afraid that Church will die as well and this provokes an argument between Louis and Rachel about death (Rachel later reveals to be still traumatized by her sister Zelda's early death, which is brought up several times in flashbacks), and Victor Pascow, a student fatally injured in a car accident, adresses his last words to Louis, even though they have never met before. Later that night, Victor's ghost leads Louis to the "pet sematary" and warns him not to cross the barrier. Louis wakes up in his bed and thinks it was all a vivid dream - until he sees his feet covered with mud and pine needles.

While Rachel, Ellie and Gage are away, Church is run over and killed by a truck on the road in front of their house (which is costantly frequented by trucks and has caused lots of pets' deaths, leading to the construction of the "sematary"). Jud takes Louis to a Micmac Indian burial ground, where he instructs Louis to bury the cat. Later Church comes back, but it is much more aggressive now, ripping apart birds and mice without eating them, and smells so bad that Ellie refuses to let it stay in her room at night. Jud confirms that the cat has been resurrected by the power of the burial ground and that he buried his own dog Spot there when he was younger, however he warns Louis that "whatever lives in the ground beyond the Pet Sematary ain't human at all", implying the presence of an evil spirit, the Wendigo, which has infected the burial site and possesses all the corpses buried up there.

Shortly afterwards Gage is killed by a truck on the same road and Louis, overcome with grief and despair, considers burying him in the Micmac burial ground and bringing him back to life. Jud, guessing what Louis is planning, tells him the story of Timmy Baterman, who was killed during World War II and resurrected by his father Bill. Timmy returned as an evil shell of himself, terrifying the townsfolk (in the novel, when Jud and three of his friends attempted to reason with Bill in order not to let the government know about the burial site, Timmy told all of them secrets he had absolutely no way of knowing), so Jud and his friends (in the novel Bill himself) set his house on fire, killing both him and Bill. He concludes that "sometimes, dead is better" and the ground has a power, which may have caused Gage's death since Jud introduced Louis to it.

Nevertheless, Louis heads to the cemetery where Gage is buried and exhumes his son's body, taking him to the burial ground while Rachel and Ellie go to Rachel's parents. After Ellie has a nightmare, stating that "Paxcow" warned her that her father is going to do something really bad, Rachel returns home. In the meantime Gage comes back, steals a scalpel from Louis' bag and heads to Jud's house, where he viciously murders both him and Rachel. In order to stop him, Louis prepares shots of morphine, killing Church and, after a violent struggle, Gage. He then sets the house on fire, carrying his wife's body out, thinking that, since she died just a little while ago, she won't come back as Gage.

The novel ends with Rachel coming back and rasping "Darling", leaving Louis' fate uncertain. The movie goes one step further, with Rachel grabbing a knife while the two are kissing and Louis screaming just as the screen blacks out,

Apart from a few differences (Ellie discovers the "pet sematary" on her own and meets Jud for the first time there, Church is killed and resurrected while the family is all home and Louis, after failing to euthanize it, sets it free in the wild) the movie follows the original until the death, with Ellie being run over by the truck instead of Gage, who Louis manages to pull away just in time.

Louis takes Ellie's corpse to the burial ground after drugging Jud so he won't stop him and, after Rachel and Gage return home (in this adaptation it's Gage who is frightened by Pascow's ghost, that warns him to go home) he attempts to get Rachel on board with their revived daughter. However, Ellie shows her new dark side killing Jud (she torments him assuming his wife Norma's shape and voice, in a way much more similar to the novel than the 1989 film) and chasing Rachel and Gage armed with a knife. They barricade themselves in the bathroom, but realizing that Ellie is breaking down the door Rachel lowers Gage out the window before being stabbed to death. Louis catches Gage, locks him in the car and returns upstairs, where Rachel begs her husband not to be buried "in that place".

Ellie knocks Louis unconscious and drags Rachel's body to the burial ground. After awakening Louis heads to the woods and fights his reanimated daughter. He is about to kill her, but a resurrected Rachel impales him and he is subsequently buried and revived as well. The movie ends with the undead trio approaching the car and Louis gesturing to Gage to open the door. A beeping sound is heard and the screen cuts to black. 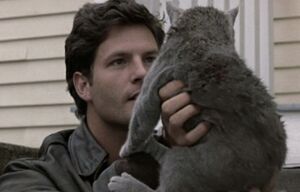 Louis with a resurrected Church. 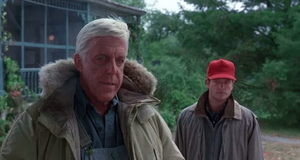 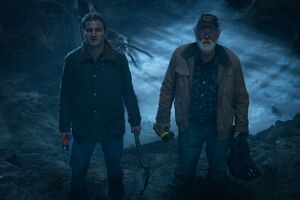 A heartbroken Louis at Ellie's funeral.