Love-a-Lot Bear is one of the ten original Care Bears who first debuted as a character on American Greeting cards in September 1982. She is a major character in the episode about the Cloud Worm when she plans with the Care Bears to split up and search for clues to solve a mystery. She can also read fortunes as revealed in the episode called "The Forest of Misfortune".

Love-a-Lot Bear is a strawberry-pink Care Bear whose tummy symbol is a red heart with a pink outline and a pink heart with a yellow outline intertwined.

Love-a-Lot is a kind bear that loves everything, and everyone. She has the propensity to use the word "love" itself in most of her speech. Love-a-Lot shares a similar personality with the rest of the bears.

Love-a-Lot's special task is to help spread love (similar to Cupid). Like the other Care Bears, she can use the Care Bear Stare.

Love-a-Lot Bear makes her animated debut in the very first Care Bears 1983 television special. After a boy named Kevin runs away from home, he ends up in the gloomy Land Without Feelings ruled by Professor Coldheart, who turns him into a Green Creature Slave. It's up her and the rest of the crew to defeat the mad professor and return the boy to normal.

In the follow-up to the original TV special, Love-a-Lot is among the bears who must once again stop Coldheart and his new sidekick Frostbite from tricking a boy named Paul into helping him complete his "Careless Ray Contraption" that will freeze everyone's feelings.

Love-a-Lot Bear appears in the first Care Bears theatrical film as one of the bears who welcomes the children Kim and Jason to Care-a-Lot during the "Nobody Cares Like a Bear" song sequence. She is later part of the crew of the ship The Cloud Clipper as they travel through the Forest of Feelings looking for their lost friends. After re-uniting with their wayward comrades, and joining forces with the Care Bear Cousins, the group travels to Earth to combat the evil Spirit and seal her away for good.

The second Care Bear feature film tells the story of how the Care Bear Family, including Love-a-Lot first arrived in Care-a-Lot after they escaped capture by the evil Dark Heart. When the villain later propositions a girl named Christy into helping him finally capture his fuzzy prey once and for all, Tenderheart is among the few remaining members not to be imprisoned, and must formulate a plan along with two children named John and Dawn to rescue his friends. After arriving at Dark Heart's secret lair, they and Christy are able to free the others and convince Dark Heart to care himself, transforming him into a real boy. 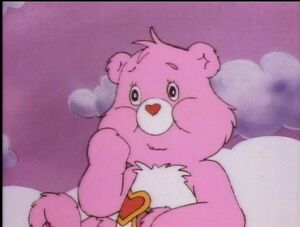 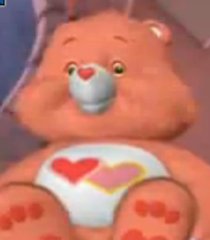 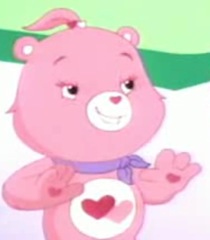 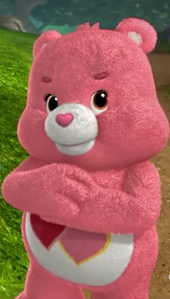 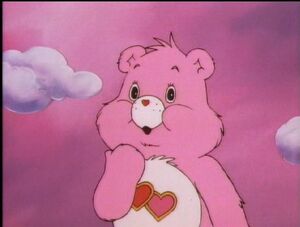 Love-a-Lot Bear wonders if something noisy has happened. 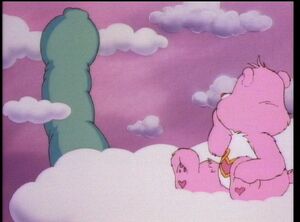 "Well, at least the mystery's solved," she says as she found the Cloud Worm. 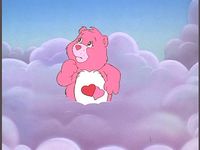 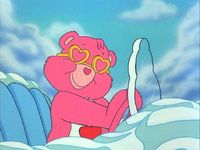 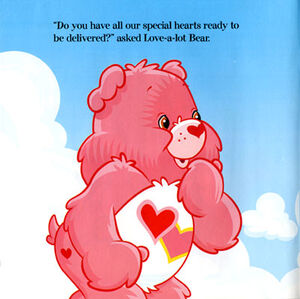 Retrieved from "https://hero.fandom.com/wiki/Love-a-Lot_Bear?oldid=1751049"
Community content is available under CC-BY-SA unless otherwise noted.