Heroes Wiki
Register
Don't have an account?
Sign In
Advertisement
in: The King of Fighters Heroes, Female, Charismatic,
and 41 more

Captain of the Peace Air Pirates

Watch the King of Fighters tournaments

Pirate
Love Heart is the main protagonist of SNK's Pachinko series, Sky Love. She is the captain of the Elicion III.

She is voiced by Toa Yukinari and Grey Griffin in The King of Fighters: Summer Adventures.

In order to avenge her father, she has resentment against Skull D. Falcon. Like her father, she is a skilled warrior who is strong enough to to fire two bazookas at the same time. She puts her father's keepsake around her neck, which can give her mysterious powers.

Once she avenged her father, she would try to overthrow the Neo G Falcon who resurrected himself after his defeat. Three years after Neo's defeat, she confronted Skull's daughter, Amelia L. Falcon, with a new star force from the threatening world.

Six months after the fight against Nova, conflict sparked when Bebernasse, the Queen of Obersistar, began to rule with terror to expand the power of her country. Love and Amelia join forces to resist Benetnasch's pursuit of control.

Love is spreaded from her world through dimensional interference. Nakoruru turned to her for help, and she asked her to help investigate the phenomenon, and Love agreed.

After Verse was defeated, Love expressed her wish to return home, but Nakoruru decided to drag her to explore their new world, more for Love's troubles.

The King of Fighters: Summer Adventures

Love first appears in a camper, along with every other girls, including Shion, talking about a cruise ship. After they arrive at the beach, they carry suitcases. Then, they are greeted by Captain Elisabeth and Professor Najd. After this, Love and Athena play lacrosse outside the cruise, beside the pool. Athena, Love and everyone are shocked to see Terry unconscious on the floatie.

After Athena nurses Terry back to health, Love suggests that there will be a royal ball and a dinner party after the ball. When it's night time, Love dances with Earth Justice clone. After the clones disappear, Love attends a dinner party. She and Athena are picked from the audience to witness the power of hypnosis to Rugal, but Athena prefers the power of something else. The misunderstanding does make Angel see the green and gray smoke cloud. After the dinner party finishes, everyone else hide under the tables because Wolfgang Krauser comes.

Krauser orders his servants, the Orochi servants, to attack them. After the others transform, they try to defeat his servants, but Elisabeth is captured and turned into Orochi Leona.

After she and the others are stranded, she is revived. She, along with the others, meet the spirits of Lily McGuire and Sulia Gaudeamus. Lily and Sulia tell them that they are going to get the treasure chest and give it to Krauser. After the spirits disappear, Love and the others complete the two slides, and they find a strange tunnel. Athena secretly pushes the button, and the tunnel's door opens. Love and the others enter, only to find out a strange brown cavern. They found Terry's wrecked ship, and a treasure chest. Love takes it, only to be captured by the Orochi servants and Krauser.

After deactivating the transformation, Athena's box is upgraded. The next morning, after Lily and Sulia's visit, Love reunites with Like, her father who is killed by Skull D. Falcon. After the Fatal Fury anime movie, she plays the drums in Athena's concert.

Love Heart in The King of Fighters XIV. 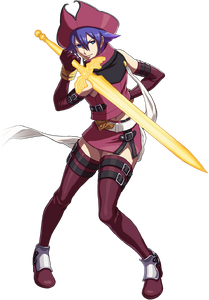