Loweemon is Koichi Kimura's second Human Hybrid form which he undertakes with the purified L Spirit of Darkness. Loweemon is powerful but flexible. He can become JagerLoweemon.

Koichi first becomes Loweemon when he purifies the Spirits of Darkness upon confronting Cherubimon. He uses this newfound power to defeat Cherubimon's shade with the true power of darkness. Loweemon becomes Koichi's default battle form, only turning into JagerLoweemon when strictly necessary. He doesn't spend too long fighting as Loweemon, however, as he gives his Spirits to Koji for Unified Spirit Evolution to MagnaGarurumon, one of the only Digimon strong enough to face their new foes. Koichi ultimately gives up his Spirits, including his ability to become Loweemon, when he sacrifices himself to protect against Lucemon's attack. Koichi leaves the Spirits of Darkness much changed from their original state. When AncientSphinxmon reawakens, he does so in Loweemon's form. 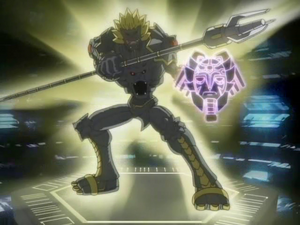