Go out with Vivian (failed).

Save as many people as possible (partially succeeded).

Lowery Cruthers is a Jurassic World employee and a major character of the 2015 film Jurassic World, and a background character in its 2020 TV series Jurassic World: Camp Cretaceous. He worked in the control room, along with Vivian Krill.

When the park's Indominus rex escaped her paddock in the Isla Nublar Incident of 2015 he stayed inside the control room throughout the incident. He saw the InGen Security Division taking over the control room and asking everyone to leave, but stayed in case anyone needed something. Eventually, he was available to attend Claire Dearing's request to open the Tyrannosaurus rex paddock, leading Rexy the Tyrannosaurus rex to attack the I. rex. Once the Indominus was defeated, Lowery shut down all systems and evacuated to the mainland.

Lowery has had a fondness for dinosaurs since he was a child. Also as a child, he was intrigued by the failed Jurassic Park which featured recreated dinosaurs. Even as an adult he had several toy dinosaurs he kept in his workplace as well as a Jurassic Park t-shirt he purchased from eBay for $150.

Lowrey shares a number of similar characteristics with Dr. Ian Malcolm from the first two films. He was visibly unsettled by the idea of a dinosaur hybrid being created, as well as the idea of Jurassic World being owned by corporations. He also expresses a belief in chaos theory, claiming he tries to keep a balance between chaos and order, similar to Malcolm's profession as a Chaos Theoretician. 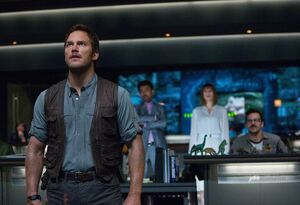 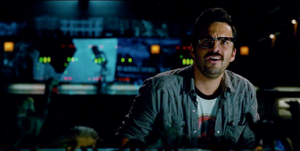