He is voiced by Dan Hennessey.

He is a blue dog of indeterminate breed, and his Belly badge is a red heart-shaped tag hanging from a collar.

While loyalty and faithfulness come standard on all of man's bests friends, Loyal Heart is an exceptionally true blue friend in the most literal sense. He's perfectly content to either doze in the posies with some of the gentler Cousins, charge howling into a fight if some bad guys rear their head, or simply provide some companionship to a person in need. This multifaceted canine may not win best in show, but he's got it all where it counts.

Loyal Heart was a minor character in the 1985 film.

Loyal Heart makes only a few appearances in the original DiC Care Bears television series, the first was when he attended Birthday Bear's birthday party in the inaugural episode.

When Professor Coldheart later attempts to cover an entire city park in cement, Loyal Heart was among the Cousins present who helped use their Cousin Call to change it back. Later, on a day at the beach with his friends, three children become lost at sea during a storm, and its up to the daring dog, Gentle Heart Lamb, Cozy Heart Penguin, and Proud Heart Cat to board the Care Bear's ship, The Cloud Clipper, to save them.

The second Care Bears movie tells the story of how Loyal Heart and the rest of the Care Bear Family first arrived in Care-a-Lot after escaping an evil force known as Dark Heart. When the villain later attempts to re-capture them, Loyal Heart is among the Cousins imprisoned in his secret lair, and is only freed with the help of a girl named Christy and the few remaining Care Bears. He later helps the rest of his friends stop Dark Heart once and for all by turning him into a real boy.

Loyal Heart makes a background appearance during the annual Care Bears Family Obstacle Race when contestants competed to be king or queen of Care-a-Lot for a Day, as well as being among the rest of the Care Bear Cousins in a basket ball game against the Care Bears. 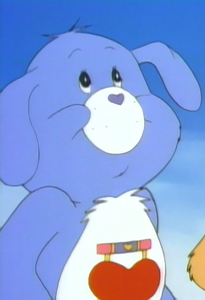 Retrieved from "https://hero.fandom.com/wiki/Loyal_Heart_Dog?oldid=1860895"
Community content is available under CC-BY-SA unless otherwise noted.