Duel monsters, Hanging out with friends

Lua and Luca (Leo and Luna in the English dub) are twin siblings and two Signers. Lua possessed the heart Mark of the Crimson Dragon. Luca possessed the claw Mark of the Crimson Dragon. They aid Yusei Fudo, who they admire and support, in his duels. They may have been brain-washed into being villains because of Rex Goodwin in the manga (Yusei managed to save them.), but in the anime they were huge heroes.

Lua's outfit is similar to his sister's; it consists of a short-sleeved white jacket over a sleeveless dark blue shirt with golden markings that differ from Luca's shirt. He also wears white shorts with a dark blue belt and blue sneakers of the same color. Lua also has a bracelet on each wrist, and his blue-green hair is pulled into a single, high ponytail with two shoulder-length bangs on both sides of his face but when he doesn't wear it up (like when he's sleeping) it looks like Luca's in the same situation. He carries a Duel Disk with a blue and white trim on his left arm, which was originally too big to fit until Yusei modified it.

Luca's usual outfit is similar to her brother Lua's, consisting of a light pink short-sleeved jacket over a long-sleeved red shirt with golden markings. She also wears light purple shorts with a red belt and sneakers with black and pink markings and high socks. She has gray-gold eyes just like her brother.

Lua is a lively young boy but is shown to get serious when the situation calls for it. Occasionally he will doubt his skill, but his sister Luca always looks towards him for encouragement. He started off as cocky and sure of himself, but became more mature and careful as the series progressed.

Luca is a very polite, kind and sweet young girl. She does occasionally critizize her brother but deeply cares for him. She also has shown to be quite intelligent and calculating in her duels like her brother. 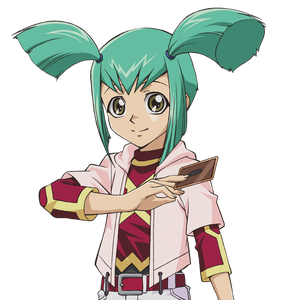 Retrieved from "https://hero.fandom.com/wiki/Lua_and_Luca?oldid=1733125"
Community content is available under CC-BY-SA unless otherwise noted.