Can fly a wasp

Lucas Nickle is the protagonist of The Ant Bully. He is voiced by Zach Tyler Eisen, who also voiced Aang from Avatar: The Last Airbender and Pablo in the first season of The Backyardigans.

As a result of being bullied, he bullied the ant nest on his property, until a certain ant named Zoc shrunk him to teach him a valuable, life-changing lesson.

Initially, Lucas was stubborn, childish and bratty. This behavior was a result of being bullied by the neighborhood kids. He didn't respect his parents and had littler regard for his sister. He did however care for his "Momma" (His ditsy grandmother). He took his anger out on constantly destroying the colony of ants that settled on his property. After being shrunk to the ant of an ant by Zoc, he is forced to learn the ways of ants. After Hova taught him to work with others on a team, Lucas fought side by side with the ants and developed into a kindhearted young kid, losing his selfish ways. In return, he gained new friends, both human and ant friends as a result of this.

Lucas is a 10 years old boy. He has slender, brown hair, light blue eyes, and fair skin with freckles. He also wears glasses and white T-shirt. 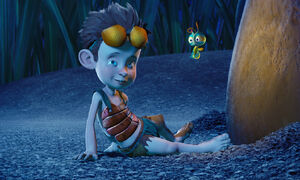 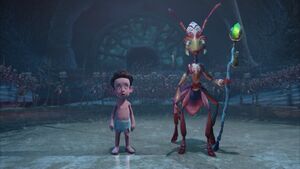 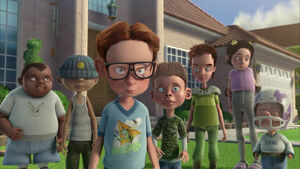 Lucas and the former bullies stand up to Steve, the head bully.