To save Kaito Domoto.

Lucia Nanami is the main protagonist of the series Mermaid Melody. Her name would sometimes be mispronounced and spelled as "Luchia". She comes from the North Pacific Ocean and Lucia's best friends are Hanon Hosho and Rina Toin.

She is voiced by Asumi Nakata in the Japanese version, and by Luci Christian in the English version.

Lucia is a very cheerful and optimistic girl. She cares for others deeply and is very straight-forward with people and shares the personality of a normal girl in love. She cares for her best friends Hanon and Rina, her family (including her sister Nikora), and love interest Kaito Domoto. She has also shown to have a strong character during her period of sadness when Kaito's memories about her were gone and Mikaru always clinging to Kaito. 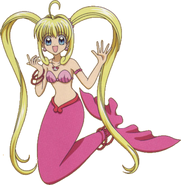 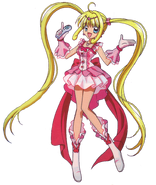 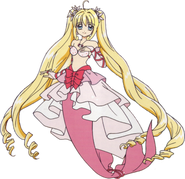 Like the rest of the mermaid princesses, Lucia needs her pearl in order to transform into her idol form. Her pearl is also needed in order to summon Aqua Regina. When in her idol form, her voice was transmitted by a microphone like object called the e-pitch, in order to defeat the enemies. Her voice is shown to be very powerful. She is also shown wearing Aqua Regina's outfit in the last volume of the manga. Her hair is loose. She also holds Aqua Regina's staff. Legend of Mermaid was a song that she would sing as child, so this is one of her image songs.

Her character songs are 'Splash Dream', 'Legend of Mermaid' and 'Koi wa Nandarou.' She ends attack songs with the phrase 'Love Shower Pitch' in both the anime and manga followed by 'Encore wa ika ga' which can be translated as 'How about an encore'?