Lucius Fox is a supporting character in the 2015 video game Batman: Arkham Knight, and its DLC GCPD Lockdown. He is the current CEO and President of Wayne Enterprises, a businessman all over the corporate world and one of Bruce Wayne's closest allies.

Fox is a shrewd and experienced businessman, entrepreneur, and inventor. Aside from running Wayne Enterprises and the Wayne Foundation, Fox also takes pride in developing weapons, gadgets, vehicles and armor for Bruce Wayne's alter ego, Batman. After The Knightfall Protocol, he now owns everything made by Bruce Wayne including Wayne Enterprises, and assists Nightwing in dealing with the Penguin.

He is voiced by Dave Fennoy, who also voiced Lee Everett in Telltale's The Walking Dead, and Gabriel the Warrior in Minecraft: Story Mode.

Not much is known about Lucius' past and how he came to work at Wayne Enterprises, but he came from a great background due to him being a great inventor and scientist. His reputation and background caught the attention of Thomas Wayne, and his company reach new heights, and became close friend of Thomas.

It's assumed Fox stayed at the company after Thomas and Martha's deaths, and later became a close friend to their son, Bruce Wayne. Fox later learned of Bruce's secret identity as The Batman, and became one of Bruce's most trusted allies with his secret identity and helping him stop threats. However, it's possible that Fox didn't learn of his identity until or after the events of Batman: Arkham Origins. Alfred states that only he and Bruce knew of Batman's identity, and it's possible that Bruce took Fox's gadgets without his permission.

Thought Fox doesn't physically appear in Batman: Arkham City, but he is mentioned by Batman and Alfred in certain parts of the game. He is first mentioned when Batman requested the Grapnel Boost, but Alfred told him that it was still in the prototype stage and that it was not ready for deployment.

In the "Tea Party" side mission, Alfred informed Batman that Fox manufactured the cure, and Batman discovered that it was truly a hallucination created by the Mad Hatter.

Fox was hinted to have manufactured the cure for Gotham's populace since Joker shipped samples of his toxic blood to all of the Gotham hospitals.

Fox attended a Wayne Foundation presentation for a city renovation project, but it was hit by a daylight robbery, and Harley Quinn attacked Lucius. Harley stole his Wayne Enterprises tablet PC and cut off his right forefinger to get past security. Fox recovered and accompanied Bruce to Germany to see Zimmer and inspect the new Batmobile. Fox and Zimmer were kidnapped by local criminals, but were eventually saved by Batman.

Fox is one of the many supporters that Batman has during the events of Batman: Arkham Knight, giving him new upgrades and gadgets to stop Scarecrow and the "Arkham Knight". The first thing Batman receives from fox is a new Batsuit, which had liquid armor that hardened on impact, allowing Batman to hit harder, survive G forces, and made him faster.

Later on, Fox was taken hostage by Hush, who was posing as Bruce Wayne in order to access Wayne Enterprises' financials to frame the real Bruce. Batman saved Fox from Hush, and if the mission was done after defeating Scarecrow, Batman will allude to Scarecrow unmasking him, telling Fox that Batman is no more after the night (as he does the Knightfall protocol to fake his death).

After Batman's "death", Lucius became the head of Wayne Enterprises, and according to Nightwing, "owns everything." Fox aids Nightwing in stopping The Penguin, and reveals that he didn't know of the Knightfall protocol, and told Nightwing that Bruce was someone you didn't question, and had a reason to do the protocol. In addition, Fox informed Nightwing that Tim and Barbara are happily married, and helped Grayson stop The Penguin from escaping. 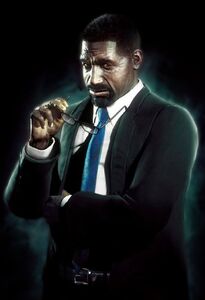