To hang out with his friends (TV).

Kid Animal
Lucky is one of the most prominent Dalmatian puppies in the 101 Dalmatians franchise. He is a supporting character in the first film (and its remake), one of the four main characters in the TV series (the others being Rolly, Cadpig, and Spot) and so on.In the TV series it is revealed that he is Roger's favorite puppy

Lucky was voiced by Mimi Gibson in the first film, Ben Tibber (the first actual male to do his voice in English) in its sequel, the late Russi Taylor in the Animated Storybook game (where he hosts the game, recites the rhymes for vocabulary terms, and narrates most of the story), and, for the most part, Pamela Segall-Adlon (and occasionally, Debi Mae West) in the TV series. In the Japanese dub from the series, Lucky was voiced by Chika Sakamoto and by Keisuke Ueda (who also voiced Patch & Domino) in 101 Dalmatians II: Patch's London Adventure and Kingdom Hearts video game series.

Like all of the puppies, he's frolicsome and sweet-tempered. However, he is also one of the weakest puppies, and was a rival to the more active Patch. Lucky is usually seen sitting in front of the television, and has a tendency to stand in front of it. In general, he is seen to be more of a follower than a leader.

Despite being so starkly different to his brother Patch, he seems to be closest to him. It's Lucky, for example, who comforts Patch in Cruella's warehouse when the latter blames himself for their predicament.

He is one of the fifteen biological puppies of Pongo and Perdita. He almost died being born, but Roger revived him with his hands, so he was named Lucky. 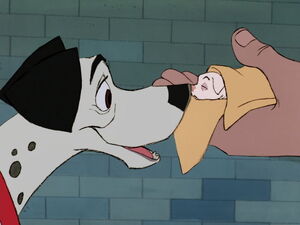 Newborn Lucky with his father Pongo 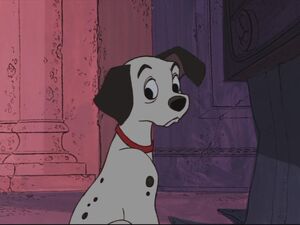 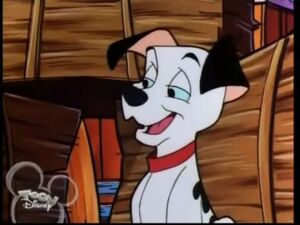