Chaotic Good
Lucky Roo is a male character in the anime and manga series One Piece. He's a pirate and a member of the Red Haired Pirates of an unknown position. It's also unknown when he joined the crew, but he appears to be fiercly loyal to his Captain, Shanks, as he's seen killing one of Higuma's men in cold blood when they were holding Luffy hostage and Shanks wanted to save him. He's the heaviest of all of the Red Haired Pirates, and is usually seen eating a chicken leg.

Lucky Roo is a tall, incredibly obese mn, with slightly tanned skin and black eyes. He wears a massive green shirt with white strips going across from top to bottom all around it, a green hat, tan pants, a blue scarfe around his waist where his shirt and pants meets, and an extremely long, yellow cape on his back. He's almost always seen holding and eating from a massive chicken leg. 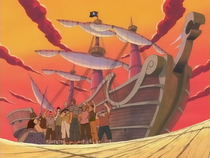 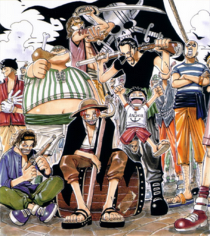 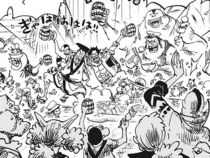 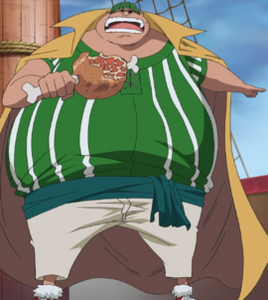