Dr. Jang and his henchmen (defeated)

God
Lucy Miller is the titular protagonist of the 2014 film with the same name. She is a woman who gained psychic abilities due to a drug known as CPH4 being placed in her system.

She is portrayed by Scarlett Johansson, who also portrayed Black Widow.

Lucy was originally a regular humane woman until she is tricked by her boyfriend into becoming a drug mule. After he was instantly killed via a single gunshot to his head, a member of this group of criminals led by Mr. Jang inserts a drug known as CPH-4 into her abdomen accidentally. While she was in captivity, one of her captors kicked her in the abdomen, unintentionally releasing the drug into her system which caused her to acquire several different kinds of powers and abilities.

Superhuman memory: Lucy can now remember her whole life even her early childhood which is normally impossible for some normal humans.

Absolute intelligence: Lucy is now much smarter than the greatest genius on Earth. She was able to deceive people effectively, find that Dr. Samuel Norman is the best person to help her and effectively find the mules carrying the drugs.

Telepathy: Lucy can now enter people's memories by touching one of their shoulders.

Sleep control: Lucy was able to put half a dozen policemen to sleep in one hand gesture.

Telekinesis: Lucy was able to repel men violently from a distance without making any gestures.

Technopathy: Lucy was able to get information about a person just by getting her hands on a computer, type so incredibly fast and appearing on that person's screen.

Shape-shifting: Lucy was able to change her hair and eye color without any hesitation and almost instantly.

Immunity to pain and fear: Lucy is now insensitive to any form of fear or pain. She is practically invincible.

Foresight: Lucy is now able to foresee any futuristic event before they actually occur.

In the trailer for the film, it says that Lucy was born March 10th, 1988 in Pennsylvania but this hasn't been confirmed yet. 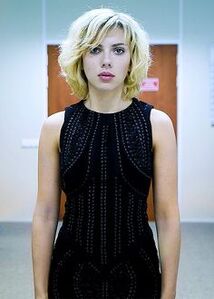 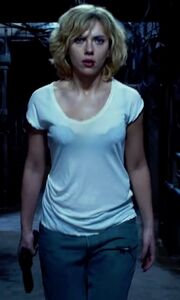 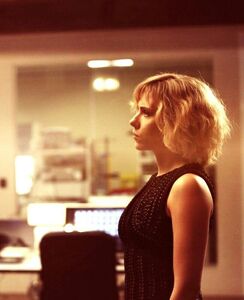 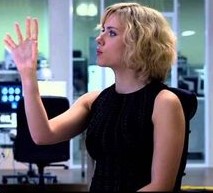 Add a photo to this gallery
Retrieved from "https://hero.fandom.com/wiki/Lucy_(2014_film)?oldid=1876076"
Community content is available under CC-BY-SA unless otherwise noted.