To save Narnia (succeeded).

Lucy Pevensie is one of the main protagonists of C. S. Lewis's The Chronicles of Narnia series.

In Disney live-action-films, The Lion, the Witch and the Wardrobe (2005), Prince Caspian (2008), and the 20th Century Fox movie,Voyage of the Dawn Treader (2010), Lucy is portrayed by Georgie Henley and her older sister, Rachael Henley as an adult.

Lucy's siblings, Peter, Susan and Edmund, do not believe her about Narnia at first, but later they all find their way to Narnia. In The Lion, the Witch and the Wardrobe, Lucy is the first of the Pevensies to enter Narnia through a magical wardrobe in the Professor old house, and sees Narnia in the One Hundred Year Winter, under the rule of the White Witch, the evil self-proclaimed Queen of Narnia. There she meets Mr. Tumnus the Faun and, later, the Beavers. While traveling with Peter, Susan, and beavers Father Christmas gives them gifts; Lucy is given a vial with magical cordial that can heal almost any injury, and a small dagger with which to defend herself "at great need". Edmund, meanwhile, had tried to betray the Beavers and joined the White Witch; he had first met her and been seduced by promises of power after first entering the wardrobe when trying to follow Lucy on her second entry to Narnia. She and her companions arrive at Aslan's camp, and later that night, she and Susan comfort Aslan as he walks to his death - although they don't know of his fate at the time. Both girls also witness his sacrifice. While their brothers are going to war, Lucy and her sister see Aslan come back to life and help him wake the creatures in the White Witch's castle, which the White Witch had turned to stone. They meet with their brothers at the end of the battle. At Cair Paravel, she is crowned to the Glistening Eastern Sea as Her Majesty Queen Lucy by Aslan to the throne as co-ruler of Narnia, this marking the fulfilling of the ancient prophecy and the end of the White Witch's reign. During her reign, the people name her Queen Lucy the Valiant. She and her siblings make a Golden Age in Narnia. Late in the Golden Age while hunting the white stag through Lantern Waste, she notices the lantern where she met Mr. Tumnus. She stops her siblings and they look and wonder what it is. Lucy, in a dreamy voice, says Spare Oom, Mr. Tumnus's phrase for the land from which they came 15 years earlier, and the children run through the wardrobe into England, where no time has passed and they are children again.

The events in The Horse and His Boy take place after the siblings are crowned, and before they return to England, in The Lion, the Witch and the Wardrobe, and Queen Lucy is a young woman who rides to the aid of Archenland. She is described by Prince Corin as being more like a tomboy, unlike her sister, Queen Susan, who is a "proper lady". She helps King Lune to welcome Aravis to Anvard, and helps to get Aravis's room and clothes ready.

Lucy (who is now 9) travels to Narnia again with her three siblings in Prince Caspian. In that book, Lucy is the only one to see Aslan at first, and she has a terrible time convincing her brothers and sister as well as Trumpkin the dwarf that he had returned, echoing her trials early in the first book. However, Edmund believes her and backs her up, due to her being right about Narnia itself existing. Aslan tells her to try again, and says that she must follow him alone if they refuse to come with her. Lucy comments that Aslan has grown larger. He explains that he appears larger to her because she is older. The Voyage of the Dawn Treader[edit] While Susan travels with Mr. and Mrs. Pevensie to America and Peter studies with Professor Digory Kirke, Lucy (age 11), Edmund and their cousin Eustace are drawn into Narnia through a magical painting in The Voyage of the Dawn Treader. This is very much Lucy's book, written largely from her point of view. However, at the end Aslan firmly tells her and Edmund that they have become, like Susan and Peter, too old to further experience the wonders of Narnia.

In The Last Battle, she plays a minor part as she returns to Narnia again with her brothers, High King Peter and King Edmund, along with Eustace Scrubb, Jill Pole, Polly Plummer, and Digory Kirke. There, she witnesses the destruction of Narnia and lives in the new Narnia created by Aslan. In the new Narnia, all the people and animals who lived in the previous Narnia during its existence return and join together. Lucy also meets her old friend Mr. Tumnus the Faun again, and Aslan tells her about a railway accident that occurs in England in which she, her brothers, her parents, Polly, Digory, Eustace and Jill died. Then she and Digory, Polly, Peter, Edmund, Eustace and Jill stay and live in Aslan's homeland for eternity, however Susan lives on the Earth.

Lucy along with Edmund, Peter, Digory, and Polly, were instantly transported to a great green field with fruit trees and a door that led to nowhere, clothed in Narnian garb. Several people came in or out of the door, but most seemed unable to see the fields or Lucy and her companions. After some time, Eustace, and then Jill, came through the door, explaining that they had been to Narnia on the other side of the door. Once everything in Narnia had been straightened out and many other Narnians had joined them, the Friends of Narnia stood by as Aslan brought about the end of Old Narnia. Then Aslan gave a great roar and began to lead all the remaining Narnians. All ran after him up the field, realizing that this was not Narnia, but that the real Narnia and the afterlife of the world they had known. They all ran until they reached Cair Paravel, but a bigger and better Cair Paravel, and met all of their old friends from all of their adventures in the Shadowlands alive and better than ever before, as well as many people of whom they had only heard, as they had not lived in Narnia at the same time. But Lucy was as Aslan said, not quite so happy as he meant her to be. She explained that it was because they (the English Narnians) were so afraid of being sent home. It was then that Aslan explained that there had been a train accident back in England, and that in their world, the children were all dead. This, the real Narnia, was Aslan's country, and a Narnian equivalent of heaven. Lucy was not going to be sent back, but was permitted to live forever in the Real Narnia. 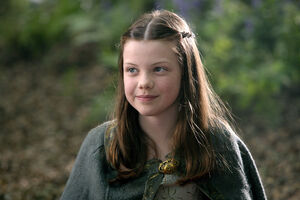 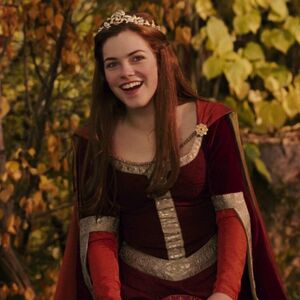 Lucy as an adult in Narnia. 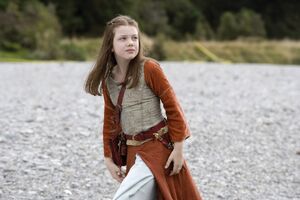 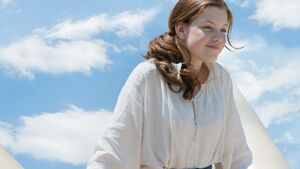 Lucy In Voyage of the Dawn Treader