Find the pieces of Eden

Lucy Stillman (1988-2012) was the central deuteragonist from Assassin's Creed franchise.

She was voiced by Kristen Bell, who also played Veronica Mars.

She was a member of the Assassin Order and former genetic memory researcher for Abstergo Industries' Animus project. During her infiltration of Abstergo, she reported back information to the Assassins on the company's recent activities.

Once Desmond Miles had finished reliving his ancestor Altaïr Ibn-La'Ahad's memories, Lucy helped him to escape the Abstergo laboratory. She then took him to the hideout, where he began his Assassin training, with the aid of new allies, Shaun Hastings and Rebecca Crane.

She was later revealed as a Templar who used to be a spy in the Assassin at the epilogue of Assassin's Creed: Brotherhood. 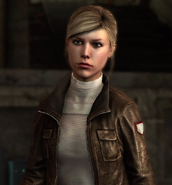 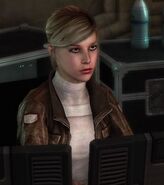 Lucy in the Sanctuary.

Lucy's death.
Add a photo to this gallery
Retrieved from "https://hero.fandom.com/wiki/Lucy_Stillman?oldid=1650527"
Community content is available under CC-BY-SA unless otherwise noted.