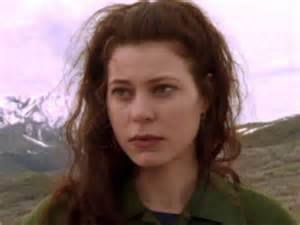 Lucy Swann is one of the heroines of the 1994 Stephen King horror film, The Stand.

In the miniseries, Lucy is portrayed by Bridgit Ryan.

The first survivor encountered by Underwood’s party, 24-year-old New Hampshire housewife, she has survived the superflu, while her husband and daughter died. Swann joins the party on its route to the Stovington Plague Center. The character becomes romantically involved with Underwood, a sentiment that she senses is unreturned due to Underwood's strong attraction to Nadine Cross; Swann's feeling persists even though Cross is seemingly uninterested in the object of her affection.

However, when forced to decide, Underwood chooses to remain with Swann, much to Swann's delight. Swann supports Larry during his tenure as a member of the Free Zone Committee, in adding to serve as a devoted wife and as a mother to Rockway. Unlike Goldsmith, Swann supports Underwood's decision to travel west to confront Flagg; although, she is unaware that she is pregnant at the time. Swann takes care of Goldsmith during Redman's absence and, by the end of the book, she has given birth to twins.