Lugia is a dual-type Psychic/Flying Legendary Pokémon. It is not known to evolve into or from any other Pokémon. It is often considered to be closely related to Ho-Oh as a duo, even sometimes as its polar opposite. Silver represents Lugia as "guardian of the seas", and Gold represents Ho-Oh as "guardian of the skies." A Lugia is the version mascot of Pokémon XD: Gale of Darkness, Pokémon Silver and its remake, SoulSilver, appearing on the boxart of them all. In Pokémon XD, Shadow Lugia, codenamed XD001, is a main part of the storyline, and Cipher's ultimate Shadow Pokémon.

Lugia is a large Pokémon resembling a dragon, a plesiosaur, and a bird. It is a pale silverish-white, but it has a blue underside with slightly varying tones. Its ridged mouth is similar to a beak, although it has pointed teeth on its lower jaw, and its eyes have pointed blue or black spikes on them.

Lugia has a long slender neck and a smooth streamlined body, with the exception of dark-blue plate like protrusions that run down the length of its back, and two smaller ones on the ends of its tail. It has large wings that resemble hands.

Lugia are shown to be peaceful, benevolent, modest, protective, calm, and intelligent creatures, but if threatened, they will unleash their fury on those who dare harm them or their offspring. They are also shown to be considerate towards others; Since their powers are vastly dangerous, they chooses to live underwater to not cause any trouble for people and Pokémon alike.

Lugia has the ability to freely control the weather, by either calming or giving rise to storms (which is said to last for 40 days). It's been said that a light flutter of its wings can create a wind powerful enough to tear down cliffs. It's the only known Pokémon to learn Aeroblast.

As seen on the 2nd Pokémon movie, it leads the Legendary birds and can fight all three of them at once. Lugia can rise in the form of a whirlpool, and is able to generate a force-field (either to protect itself or act as a battering ram). Its Aeroblast was powerful enough to destroy Lawrence III's airship.

In Movie 18, it was able to hold its own and cause damage to Hoopa's Unbound form (unlike some of the other Legendary Pokémon).

The Power of One

Lawrence III wanted to capture Lugia to add to his collection, but first he must capture the Legendary birds (Articuno, Zapdos, and Moltres). It was prophesied that Lugia will rise to calm down the birds' rage. Once Lugia appeared Lawrence III sought to subdue and capture it.

With the help of Ash (the chosen one), they managed to save the world and calm the birds down. Afterwards Lugia went back into the sea.

Hoopa and the Clash of Ages

Lugia appears after being summoned by Hoopa's Confined form, to help Ash and friends fight against Hoopa Unbound. Lugia saved Ash, Pikachu, and Hoopa from The Fury, but not before being shot down. In retaliation, Lugia attempted to attack The Fury, but the latter used its ring to send Lugia back into the sea. 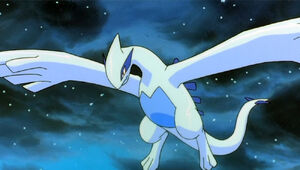 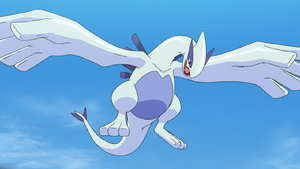