Saving people and the world.
Having adventures, along with his brother.

Defeat Bowser.
Help Mario to save Princess Peach and the universe.

Luigi is Mario's thinner, younger, and taller brother. He often helps out in protecting the Mushroom Kingdom from Bowser and other villains, he is normally a secondary hero, a second player, and a deuteragonist, but he has also been the main character of his own game in Luigi's Mansion and it's sequel Luigi's Mansion: Dark Moon where he rescues Mario from King Boo. He also had a little known role in the PC game Mario is Missing which is the first official game that he was the star of. Luigi also has his own rival Waluigi and his own love interest, Princess Daisy since Mario Tennis for the Nintendo 64.

In the 1993 live action film, he is played by John Leguizamo, who also voiced Sid in the Ice Age series. In the Video Games, Like his Brother, Mario, is currently voiced by Charles Martinet.

Luigi is thinner and taller than his brother. As a twin, he wears the same clothes that Mario wears, but darker blue overalls, green cap with the letter L printed on it, and a green shirt. Like Mario, Luigi has blue eyes with black pupils, and has a mustache, that's much more smoother compared to Mario's.

In the Mario TV series, Luigi wore green overhauls, a blue shirt, and had green eyes and black hair.

Luigi is usually described as a coward and Mario's shadow. He always is in Mario's shadow and doesn't always get recognized by people easily, usually being referred to as Mario's brother or Green Stache. Despite that He has a fanbase as shown in Paper Mario: The Thousand Year Door. While normally timid, clumsy, and shy, Luigi always manages to summon up the courage to fight his enemies and help his brother out.

In the Paper Mario series, Luigi is shown to be more chatty and cocky.

Despite his sibling rivalry with Mario from time to time, the two have a close bond with each other and will do anything to help one another.

Despite his negative traits, Luigi is sweet, brave, smart, and pure good. It's hinted that Luigi has a crush on Princess Daisy, as the two are always paired when not with their respective partners. 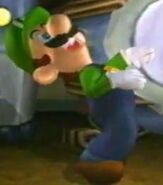 Luigi laughing at the end of Luigi's Mansion. 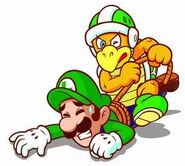 Luigi is being kidnapped by Hammer Bro in Super Princess Peach.

Luigi as a doctor.

Luigi as he appears in Super Mario Odyssey.

Luigi runs around with groceries.
Add a photo to this gallery
Retrieved from "https://hero.fandom.com/wiki/Luigi_(Super_Mario_Bros.)?oldid=1128239"
Community content is available under CC-BY-SA unless otherwise noted.