Drooling, dressin' up for carnival

To help Blu and Jewel free from the chain (succeeded)

He is voiced by Tracy Morgan, who also voice as Blaster The Guinea Pig from G-Force and Felix from The Star.

He is the friend of Rafael and is smart with chains and saws, but with the kind of helmet he uses, he can't see or hear any better than he can without it. He is a Carmen Miranda fan, as he is also seen wearing Carnival clothing and a fruit hat. He is a bulldog (much to the disappointment of the heroine Jewel, who has one thing against them: their drooling on her). In fact, he proves you cannot judge a book by its cover, because he looks frightening and feels like ripping birds' throats out and biting their heads off, but he doesn't; he just drools on them, which is "a medical condition".

Luiz is first only mentioned several times by Rafael and isn't seen until Blu and Jewel enter his garage. They find out that he is a dog. Much later, he attempts to break the chain off the feet of Blu and Jewel using a buzz saw, but nothing goes well, and his helmet is split in two by the blades. However, when he catches the chain, his drool lubricates over the macaws' chained feet, thus removing the chain, and he spits it onto the buzz saw. He then accompanies Blu when Jewel, Pedro, Rafael and Nico are flying until Blu himself leaves. After Jewel and Blu argue and part ways, Luiz has gotten ready for Carnival, only to find everybody left him alone.

However, when Blu finds out that Nigel, the cockatoo, kidnapped Jewel and took her to the parade, Blu rides Luiz's fruit hat, and they go through the parade while searching for the smugglers' chicken float. At one point, while Blu is riding one of the alligator performers' skateboard, Luiz is biting it (or another one) by the costume's tail. When, while Linda and Tulio are following the smugglers by stealing the float, Luiz is on it, refusing to ever get down from there, as Carnival is a distraction to him. He isn't seen much longer until the end credits when he is secretly hang-gliding behind . Also, in one of the photographs as an epilouge in the end credits, he is shown dancing with the aviary's best night security guard Sylvio, both in Carnival clothing.

The Buzzsaw slices Luiz's helmet in half 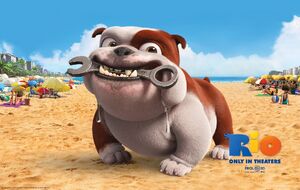 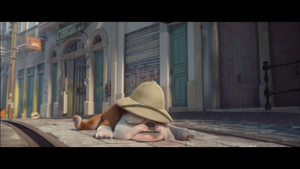 "They left without me, again! That's messed up!"