Handsome (by Stella)
Blondie (by Jack)
Jerk (by Axel)

Leader of the Ocelots (formerly)

Adventuring
Writing in his journal

Help Jesse defeat the Wither Storm
Help Jesse on their new adventures, such as defeating Romeo (both succeeded)
To reform the Ocelots (formerly: succeeded)

He is voiced by Scott Porter, who voiced Luke from The Walking Dead: Season 2.

Lukas wears a white and purple striped T-shirt that is topped with a black leather jacket with an ocelot symbol on the back, as well as pale blue jeans. He has blue eyes and blond hair. In the promo photos for the game and the first trailer for it, he is wearing a hat and the same T-shirt inside the current design. He appeared to be a cowboy.

In his current dress he wears armor.

Lukas is caring, supportive and loyal to his friends. He was the nicest and most friendly member of the Ocelots, being the only one who didn't taunt and make fun of Jesse's Gang.

Lukas starts off as a bit of a coward, as shown when he froze in front of the Wither Storm, but later becomes quite brave, using fireworks to distract all three of the Wither Storms, while taunting them and clearly not cowering like before. He cares deeply for his friends and won't hesitate to risk his life for them, as shown in Episode 2 if Jesse falls down a pit in Soren's Lair, Lukas will jump down to make sure he/she is okay. In Episode 4, when finding out that the Ocelots might still be alive, Lukas tries to leave Jesse's group and find his old team, despite the danger.

Like many characters in the game, not much is known about Lukas's backstory, except that he was the leader of a group called The Ocelots, who have been rivals with Jesse's Gang for a while. 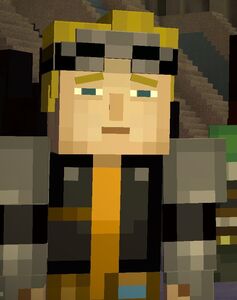 Lukas as a member of the New Order of the Stone 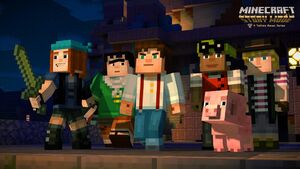 Lukas with Jesse, Reuben, Axel, Olivia, and Petra. (Note: Lukas's hairstye and even his outfit do not look like that in the actual game.) 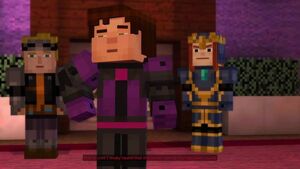 Lukas with Jesse and Petra in A Portal to Mystery.

Lukas watches with the others as Jesse makes Hadrian fall and get eliminated. 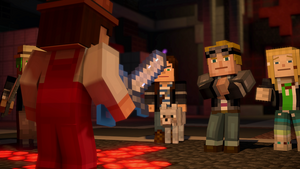 Lukas and Jesse confronting each other 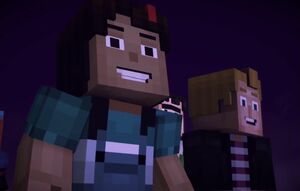 Jesse and Lukas in the End