Heroes Wiki
Register
Don't have an account?
Sign In
Advertisement
in: Articles under construction, Mature, The Walking Dead Heroes,
and 32 more

Protect his friends at all costs.
Escape Carver's camp.

William Carver (arch-enemy) and his gang

Luke is the tritagonist in Season 2 of Telltale Games' The Walking Dead. He's one of the leader of the Cabin Group alongside Pete and Carlos. He also acts as a brother figure to Clementine after he meets her.

Episode 6 - All That Remains

Luke meets Clementine when she is in trouble in the woods. He decides to carry her until he discovers that she has a bite. Luke drops her to the ground and panics but Clementine explains herself. When the group arrives at their home a huge debate breaks out as to what to do with Clementine. Luke defends her but she ends up in the shed to stay overnight and see if she has turned. Once the group finally lets her inside due to a walker attack Luke offers to feed her. He carries through with his offer and gives her something to eat. The two talk with each other and Clementine explains her story to him. Luke even tries to get her to understand Nick's situation and get her to forgive him. Luke and Clem seem to have bonded from this and depending on your choices he could arguably be your closest ally in the game at the moment.

Luke once again plays a major role in the second episode. Once Pete dies Luke has to take on the leadership role in the group. Clementine and Luke bond some more and Luke even picks Clementine to help him clear off the bridge the group needs to travel across of Walkers. Luke almost dies and Clem helps to save him. The two meet a friendly man on the bridge who is killed by Nick by mistake. Nick tells Clementine that he wishes he could be like Luke and have his confidence and skill. When the group arrives at the lodge and Clementine gets reunited Kenny, Luke's bond with Clem is tested. Clementine can choose to sit with Kenny or Luke during supper and make other choices revolving around her bond with Luke. Luke clashes with Kenny with this factor being a part of it. When Luke and Kenny leave the lodge Carver breaks in and kidnaps the entire group. According to Kenny he told Luke to "take a hike" but whether or not Kenny can be trusted or if Luke is okay is left unknown.

Early on the group wonders if Luke will come to save them or if he has abandoned them. When Clem walks in front of a former comic shop she gets her answer when Luke grabs her and brings her inside. Luke is tired and out of it and explains how he came all the way to the camp without getting sleep. Luke asks Clementine to bring him a walkie talkie as a part of his plan to help the group escape the camp. Kenny has other plans that clash with Luke's but any plans they have are hurt when Luke is caught by Carver. After the group is reprimanded by Carver Bonnie tells them that she will help them escape that night. Luke wants to rest but the group ends up going through with leaving no matter Clem's choices. While Clementine sneaks to get the speakers activated to lure the Walkers Luke and the group are cornered by Carver at gunpoint. Luckily Clementine shows up in time and jumps on Carver's back knocking the gun from him. Luke and Kenny punch Carver and Luke grabs his gun. Luke is hesitant to shoot Carver but Kenny shoots Carver in both of his legs. Luke and most of the group head outside as Kenny bashes Carver's head in with a crowbar and kills him. The group rubs zombie guts on themselves and walks through the horde of zombies surrounding the building. Luke survives this and will appear in episode 4.

Luke is a friendly young man. As soon as he sees Clementine in trouble he helps her and carries her to the place his group is staying. This shows that he is a heroic person who comes to the aid of others when in need. When he discovers she is bitten he reacts in fear and drops her. Having experienced trouble with Walker bites in the past this reaction was reasonable. Despite this, when she explains herself Luke is one of the few people to believe Clementine. After Clementine is locked away in the shed he feels very guilty. Luke also brings her food after the ordeal and tries to comfort her. Luke even offers Clem to stay in the group he is in. These actions make Luke easily the most friendly and likeable of the main group so far in season 2. Having only one episode out though Luke's faults and motivations are currently unknown. 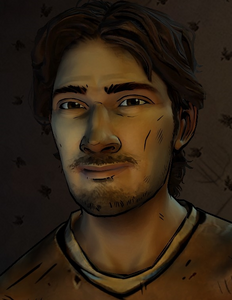 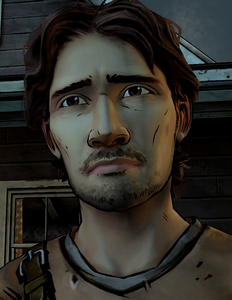 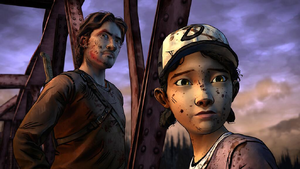