Luke Cage (born Carl Lucas and also called Power Man) is a fictional superhero from Marvel comics. The character was Marvel's response to the "blaxploitation" movies of the time, such as Shaft, and the character has gone onward to became a famous superhero in the comic book world.

He obtained his powers in an accident in Seagate Prison that left him with near impervious skin and superhuman strength. Cage became a superhero, and is well known member of the Defenders, and the partner of Iron Fist, Misty Knight, Colleen Wing, Victor Alvarez, and Jessica Jones (his later wife).

He was created by Archie Goodwin, George Tuska, John Romita Sr. and Roy Thomas, and first appeared in Hero for Hire # 1 in June of 1972.

In the Marvel Cinematic Universe, he was portrayed by Mike Colter.

Dr. Noah Burstein recruited Lucas as a volunteer for experimental cell regeneration using similar principles as observed in the Super-Soldier process he had previously used to imbue Warhawk. Burstein immersed Lucas in an electrical field conducted by an organic chemical compound; when he left Lucas unattended, Rackham, in an attempt to kill Lucas, caused the machine to overload inducing body-wide enhancement that gave him unbreakable skin, astronomical strength as well as stamina.

Luke Cage was born in New York and his birth name was Carl Lucas, being the son of Ester Lucas and James Lucas, a retired detective, and the brother to James Lucas Jr. In his youth, Carl befriended Willis Stryker and Reva Connors, and the group spent their time on the streets of Harlem. Carl and Wills eventually joined The Rivals, a gang that fought against the Diablos and committed thefts for Sonny Caputo (who also known as Hammer).

Carl spent his time in and out of juvenile homes, but he dreamed of becoming a racketeer until he realized his actions were hurting his family. Seeking to better himself as an adult, he left the Rivals, but remained on good terms with Willis, who rose through the ranks of crime. Later on, Carl saved Willis when he was attacked by the Maggia, after Stryker gained there attention. After the incident, Reva ended her relationship with Willis and turned to Carl for comfort, causing a rift to develop between the two.

Believing Carl caused his break-up with Reva, Willis planted heroin in Lucas' place and tipped off the cops, having him arrested and sent to prison. He attempted to get revenge by contacting the Maggia, but the group failed to kill Willis, but Reva was killed in the process. Carl lost contact with hi family due to the resent of his James Jr., who intercepted Carl's letters to their father, making them believe the other was dead.

While in prison, Carl was consumed with hatred for Willis' betrayal, and was angered by his father's supposed death. He spent time getting into brawls and attempted to escape several times, to no avail. As a result of this, Carl was transferred to Seagate Prison, which was one of the toughest facilities in Georgia. On his first day, he became the target of Albert "Billy Bob" Rackham, a racist and sadistic prison guard. Rackham's brutality eventually caused him to be demoted, fueling his hatred of Carl even more.

Dr. Noah Burstein came to Seagate to carry out secret medial research and recruited Carl as a volunteer, and worked on experimental cell regeneration based on the Super Soldier serum which he had previously used to empower Warhawk. Lucas was placed into the "Electro-Biochemical System", a device that contained an electrical field conducted by an organic chemical compound, and Rackham saw an opportunity to kill Lucas when the equipment was left unattended.

The treatment accelerated through Carl's body, fortifying his cells that gave him superhuman strength and invulnerable skin. Carl used his powers to escape the prison and make his way back to Harlem, and was inspired to use his new powers for profit after encountering criminals. Seeing that he was now a wanted man for escaping Seagate, Carl decided to change is name from Carl Lucas to Luke Cage.

Class 50; Cage's strength has increased substantially and is enough for him to lift at least 50 tons, possibly much more. 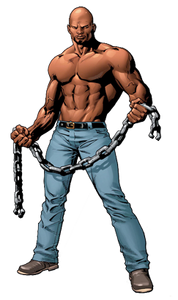 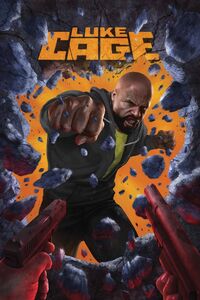 Luke Cage punching through a wall. 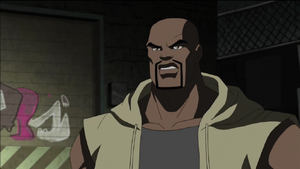 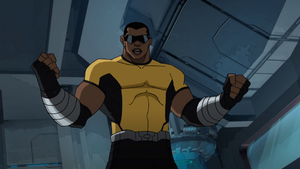 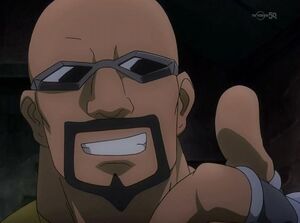 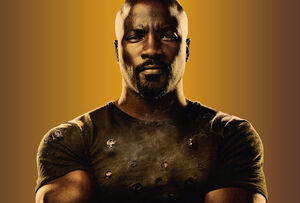 Luke Cage in the Marvel Cinematic Universe, appearing in his titular Netflix series. 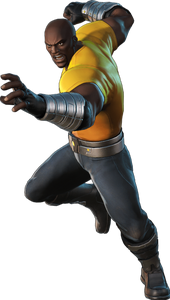 Luke Cage in Ultimate Alliance 3: The Black Order.
Add a photo to this gallery

Retrieved from "https://hero.fandom.com/wiki/Luke_Cage?oldid=2014772"
Community content is available under CC-BY-SA unless otherwise noted.