In the film adaptions, he was portrayed by Jake Abel (who also plays Adam Milligan), and Samuel Braun young. In the off-Broadway and national tour, he is played by James Hayden Rodriguez.

Luke is a son of Hermes. He was once the counselor of Cabin Eleven. Annabeth Chase, Thalia Grace, and he all were runaways from home, and made their way to Camp Half-Blood. In The Lightning Thief he betrays Percy, joining Kronos in his army against the gods. He is made the leader of the war, Kronos after even used his body for the process of coming to full power.

He swam in the River Styx, making him impossible to kill unless knocked in his "Achilles heel." He helps Kronos rise and practically helps destroy the world because of it. But in the end he betrayed Kronos, taking the knife offered to him and killed Kronos along with himself to save his friends and the world. His dying words are to Percy and Annabeth, asking them to help other Demigods from being mistreated and left unnoticed.

Luke Castellan was born in Westport, Connecticut to May Castellan and Hermes, the Greek God of travelers and thieves. Luke and his family lived happy, and his parents took him to Camp Half-Blood, where May wanted to hot the Oracle of Delphi. Inside the house, the Oracles' curse that was placed by Hades didn't allow May to become one, but showed her son's tragic future, which drove her insane.

Luke lived with his mother until he was nine years old, and ran away and traveled for years alone and miserable. Luke attempted to befriended mortals, but they didn't understand him when he tried to tell them of his origins, as they thought it was game. When he was eleven or twelve, Luke found Thalia Grace, the daughter of Zeus in a dragon's cave outside Charleston. Thalia was able to understand Luke, and the two traveled across the United States, and battled multiple monsters.

The duo eventually reached Richmond, Virginia, where Thalia was pursuing Amaltheia and were directed to mansion by a goat. The two met Halcyon Green, the son of Apollo, who was cursed and part of it was to bring demigods to be eaten by the Luecrotate's. Luke was angered that the gods would do this to Halcyon, and wanted to find a way to rescue him and Thalia from the creatures. Halcyon warned Luke of his dark future and gave him a dagger and diary before he sacrificed himself to let Luke and Thalia escape from the luecrotate's. Luke and Thalia escaped the mansion, and Thalia scared off the surviving luecrotate with Aegis.

Afterward, Luke sensed the presence of somebody, and met a seven-year-old Annabeth Chase in an alley way, and learned that she was a demigod as well. Luke and Thalia decided to adopt Annabeth as their little sister, and Luke gave her the dagger that Halcyon gave him in the mansion. The group left Richmond and continued to survive in the world, fighting and avoiding monsters that came their way.

At some point, Thalia was injured by a monster, and Luke decided to take the girls to his mother's house to heal her wounds. At the house, Luke met his father for the first time, and expressed his anger at Hermes for not showing up when he prayed to him to help his mother or when running from monsters. Hermes then inadvertently revealed that he knew Luke's fate, but refused to tell his son, causing Luke to become angry and leave the house with Thalia and Annabeth. According to Thalia, Luke was never the same after speaking with his father, and became reckless, often fighting monsters to prove something.

Eventually, the trio met Grover Underwood, a Satyr who decided to take them to Camp Half-Blood to protect them from monsters. However, Hades sent monsters after the group, as he was bitter that Zeus murdered his beloved Maria di Angelo for having children, and hoped to kill Thalia. Grover took them to an abandoned mansion, which was a Cyclops lair, and the group were attacked by them. Thalia decided to sacrifice herself to save Luke, Annabeth and Grover, which was Halcyon's first prediction. Zeus took pity on his daughter, and turned her into a pine tree that she wouldn't die and be judged by Hades, as Luke, Annabeth and Grover made it to the camp. Afterward, Luke become angered at the gods, and started to fall into darkness as a result.

Luke was offered a quest by his father when he was seventeen, and was told to seek a Golden Apple at the Garden of Hesperides from the tree. Luke failed his quest, and was scarred on his face by the dragon Ladon, who was guarding the tree. However, he supposedly injured the dragon, and collected a steal claw. He returned to the camp and was treated with "pity" by the campers as he stated, and his grudge against the Olympians and his father increased.

The Titan Kronos contacted Luke in his sleep, convincing him to join the Titan's cause to get his revenge against the Olympians. Luke pledged himself to the Titan, and was given the sword Backbiter from Kronos, to prove his oath. Halcyon's predictions came true, that Luke would be tempted and betray his allies at Camp Half-Blood. Luke was assigned to steal the Master Bolt and the Helm of Darkness, as a way to start a civil war between the Olympians. Luke made his move when going on a field trip to Mount Olympus, stealing the weapons when the counselors were asleep.

The gods discovered the theft, and sent many Olympians to find their weapons, such as Artemis, Ares and Athena. Ares found Luke and fought him to get the bolt, and Luke spoke in Kronos' words to misguide the god of war. Ares was awed by Kronos telling him that if the weapons were stolen, there would be a full scale war. Ares spared Luke, but took the Master Bolt and the Helm of Darkness and kept them in his possession. Afterward, Luke returned to Mount Olympus before anyone noticed his absence, awaiting for the civil war to happen between the gods. 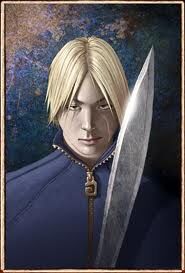 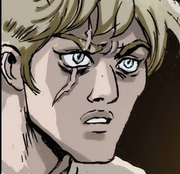 Luke in the graphic novel.
Add a photo to this gallery

Retrieved from "https://hero.fandom.com/wiki/Luke_Castellan?oldid=2182021"
Community content is available under CC-BY-SA unless otherwise noted.