Teenage Artificial Intelligence, Genius
Luke Smith is the adoptive son of Sarah Jane Smith, the adoptive brother of Sky and one of the main protagonists in The Sarah Jane Adventures. He also appears in the Doctor Who episodes "The Stolen Earth", "Journey's End", and "The End of Time".

He is played by Tommy Knight.

He was an artificial human created by an alien race called the Bane but afterwards he was adopted by Sarah Jane and lives with her in 13 Bannerman Road in Ealing in London.

In the episode Revenge of the Slitheen, Luke begins attending school with his friend Maria Jackson and later befriends another student at the school named Clyde Langer. Later in the episode, Luke along with Maria, Clyde and Sarah-Jane foil the plan by a family of aliens called the Slitheen, who had attempted to turn off the sun and destroy Earth in order to avenge the deaths of other members of the family who came to Earth previously and were killed by a missile fired at their base at 10 Downing Street by Mickey Smith on the orders of The Doctor.

In the episode The Lost Boy, a couple named Jay and Heidi Stafford claimed that Luke was in fact their missing son Ashley. Luke was given to Jay and Heidi, who proceeded to keep him locked in his bedroom and refused to let him see his friends. One day, Luke tries to escape, only to be caught by his "parents", who reveal themselves to be Slitheen and are in league with Korst, a young Slitheen Luke previously encountered in Revenge of the Slitheen. The three Slitheen attempted to harvest Luke of his telekinetic energy, but he overpowers them and escapes. He later learns that the Slitheen were under the command of Sarah Jane's computer Mr. Smith, who was actually a crystal-like being called a Xylok and wished to crash the Moon into Earth to free his fellow Xylok. Fortunately, Sarah Jane and the Slitheen work together to make Mr. Smith forget his plan and instead make it his mission to safeguard Earth.

Luke continues to have adventures with his adoptive mother and friends before leaving to attend Oxford University, taking K9 with him. It is here that he befriended another student named Sanjay, who is mentioned by Luke in the episode "Death of the Doctor".

In the second part of the Doctor Who episode "The End of Time", Luke is nearly hit by an oncoming car outside his house but is saved by The Tenth Doctor, who was close to regenerating. The Doctor then bids a silent farewell to Luke and Sarah Jane.

When on a break from university in the final episode of The Sarah Jane Adventures "The Man Who Never Was", Luke returned home to visit Sarah Jane and met his adoptive sister Sky.

In the 2020 short episode "Farewell Sarah Jane", Luke is said to now work for UNIT (who are allies of the Doctor) and attends Sarah Jane's funeral alongside Clyde, Rani (who joined the gang after Maria moved to America), Sky and several of Sarah Jane's friends (among them former companions of the Doctor). The service is interrupted by Sarah Jane's old enemy The Trickster, but the guests quickly defeat him and carry on with proceedings. It is also said that Luke and Sanjay have been married for five years and it was Sarah Jane who had convinced Luke to talk to him (as Sanjay had been "looking at Luke that way"). After the funeral, Luke, Clyde and Rani go to Sarah Jane's home 13 Bannerman Road one last time to see Mr. Smith, who is also emotional about Sarah Jane's death. As part of Sarah Jane's instructions, they are to completely leave the house vacant until the day someone else comes to continue what they started. It is mentioned that Luke had been working with UNIT in Geneva when he had heard that Sarah Jane had died. The trio then reminisce about their time with Sarah Jane before going their separate ways and promise to meet with each other again on Christmas Day.

Luke with his adoptive mother Sarah Jane and his friends Maria Jackson and Clyde Langer. 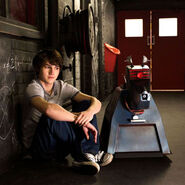 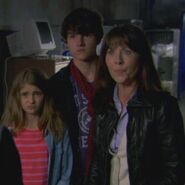 Luke with Sarah Jane and Sky