Lulu, also known as Lu, is a playable character in Final Fantasy X who also appears in Final Fantasy X-2 as an NPC. She is one of Yuna's guardians. Since Lulu grew up with Yuna in Besaid, she and Wakka think of Yuna as a younger sister. Lulu's stoic and self-possessed nature makes her seem insensitive at times, but she has a hidden bit of gentleness underneath.

She specializes in the art of Black Magic, using various dolls to help cast powerful spells. She is instrumental in helping Tidus adjust to the world of Spira, although she does not fully believe his claim of being from Zanarkand.

She was voiced by Paula Tiso, who also voiced Jihl Nabaat in Final Fantasy XIII.

Lulu deviates from the "traditional Black Mage look" like that of Vivi Ornitier by taking on inspirations from the traditional obeah voodoo priestess and a modern day witch known for their mysterious manner of clothing as well as their common practice with black magic and usage of voodoo dolls. She is dressed in an low-cut fur-lined dark-grey-and-black dress that prominently displays her ample cleavage (from which she pulls out items when she uses the Item command).

She wears a collection of interlaced belts below the waist. Her hair is tied up in a knot at the top with long braids dangling from it. She wears many accessories, including several necklaces, rings and many ear piercings, as well as dark purple make up. Her manner of dress is a stark contrast from the other residents of the tropical isle.

Lulu is first mentioned in the game by Wakka who warns Tidus about Yuna's guardians, stating that "One of them's got a short fuse". Lulu is stern, scathing, vituperative (particularly to Wakka), and does not smile often. She is nonetheless kindhearted and caring toward others. She is also highly intelligent, and is one of the few Yevonites to question the religion on objective terms. 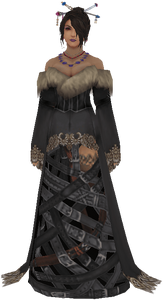 Retrieved from "https://hero.fandom.com/wiki/Lulu_(Final_Fantasy_X)?oldid=1828492"
Community content is available under CC-BY-SA unless otherwise noted.