Lulu, also known as The Fae Sorceress, is a heroic playable champion in the MOBA game League of Legends.

A childish, playful yordle from Bandle City, Lulu befriended a fairy named Pix, who led her to a mystifying realm named the Glade where she played to her heart's content. When she returned, lots of time had passed and she had been forgotten, but her magic still remained. She longed to go back to the Glade, but neither she nor Pix could remember. Nowadays, Lulu crosses into the various regions of Runeterra to make mischief with her magic.

The 95th champion added to the game, Lulu was released on March 20, 2012. She is often played as a support.

Lulu was always an empathetic individual, so it was no surprise that when she found an injured bird, she went up to help it. The bird revealed itself to be a fairy, which flew away to guide her, and she gave chase. As Lulu ran, her surroundings began to warp and twist as she unknowingly crossed through the spirit realm.

When she arrived, the fairy introduced himself as Pix, and turned Lulu's walking stick into a magical staff as he introduced her to the Glade, a mysterious, magical realm where Lulu's magic had been amplified and she could make her imagination come to life. She played in the Glade for so long that she had lost track of time.

Eventually, Lulu left the Glade and found herself back in the material realm. She didn't know how much time had passed, as the Glade had a warped passage of time even for Bandle City standards. However, to her joy, Pix and the magical powers she gained remained, and she brought her magic to her surroundings, to Pix's amusement. However, she began to miss the Glade and wished to return but she didn't know which way to follow. Pix claimed that he had forgotten the way as well, but possibly didn't want to go back just yet.

Lulu traveled across Runeterra with Pix, looking for the ever-shifting shortcut to the Glade while also pulling pranks on people she encountered along the way. Once she found her way to Demacia, where she led a group of children away from their history lessons and turned them into toadstools, to the horror of their parents and the military, before they were returned and told the story of their encounter with Lulu (which the adults didn't believe). Then she walked into a war in the Freljord between two rival tribes, and she turned all of their weapons into flowers to their confusion. Recently, she has appeared in Ionia, where she plays in Qaelin and regularly pranks the acolytes of the Order of the Shadow, whom she considers too serious for their own good.

While Lulu seeks to return to the Glade, and misses it, she is happy, for every day brings more opportunity for adventure and fun. And besides, she has come to realize that she carries a part of the Glade in her heart, wherever she goes.

When Teemo was captured in Bilgewater by Twisted Fate and Graves, his yordle friends in Bandle City wanted to rescue him. Tristana, Teemo's closest friend, insisted that she go alone, but Lulu and Corki wanted to help as well. Tristana convinced them both to go on decoy missions, sending Corki after a fake bogey in Piltover and making Lulu look after a rock. As the others left, Lulu grew impatient and sulked, accidentally transforming Pix's had into a yordle's. Corki went back to Bandle City, then invited Lulu to cause a ruckus. By that point, Tristana had been captured as well. Corki tried to fly in with his plane, but crashed and landed in the cage. Lulu approached them having enlarged herself, holding the rock and complaining to Tristana that it doesn't do anything. After touching the cage, she shrunk into her normal size, but the rock dropped on Graves' foot, causing him to shoot the rope and free the other yordles. Graves grabbed Corki and threatened Tristana, but Lulu transformed him into a baby Gromp. Tristana thanks Lulu's support, and the yordles return to Bandle City. 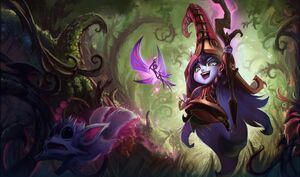 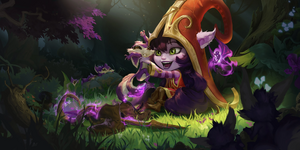 Lulu's artwork in Legends of Runeterra. 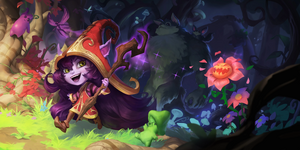 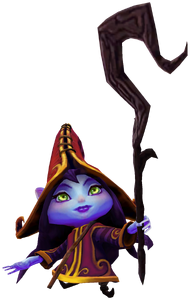 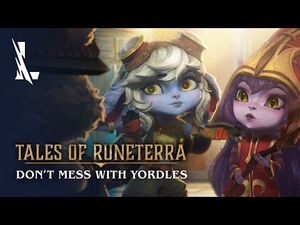