Lulun is the Princess of the Garden of Light. She is said to be the one "who weaves the future." and turns into the Miracle Commune to aid Shiny Luminous.

Lunlun resembles her brother, being white colored with a golden crown and furry neck. Her extra colors are light pink and she has pompom like tips of her ears, tail, and neck. Where a hot pink orb resides.

Lulun, like Pollun, is a bit spoiled and acts like a sweet little girl despite her royal status. She's more of a crybaby than her brother, though and often likes to tag along with him, to his initial annoyance. If Pretty Cure are in trouble she does what she can to help. As the series goes on, she becomes braver. She ends her sentences with "-lulu".

She is voiced by Asuka Tanii. 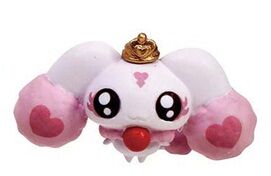 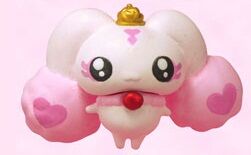