Lum, Ramu is the daughter of the Oni Invader. She also is the one of the major female characters from Urusei Yatsura.

The owner of a very sexy body, she misunderstood Ataru Moroboshi's proposal and has forced her way into his life as his "loving wife".

Lum met Ataru when he was randomly selected by a computer to face her in a game of tag with the fate of the earth on the line. Ataru had been promised marriage by Shinobu if he could win, so upon catching Lum he declared "Now I can get married!" Lum mistook this as a proposal to herself and accepted it. On her planet engagements are sacred, she is completely determined to be married to Ataru for the rest of her life, falls completely in love with him, and refers to him as Darling. She violently shocks him whenever he looks at or flirts with another girl (or if he insults her or does something to make her unhappy), but almost always forgives him in the end.

Lum is a very sweet, innocent, faithful, and good-natured girl but she can also be jealous and get a very hot tempered, usually due to Ataru and his incessant addiction of flirting.

Her ears are slightly pointy and she has long green hair. She has two tiny horns on her temples. She also has fangs on the top of her mouth.

She wears a tiger-striped bikini (based on the tiger-striped loincloths of mythical oni, which were made out of man's bad karma). Her bra is also used to hold some of her special devices.

When she began attending school, she wore a sailor suit and tried to act like a typical earth girl.

Powers and other Abilities

Lum refers to herself in the first person as uchi and is famous for usually ending her sentences with ~datcha. When used by itself, "datcha" means "Yes". A similar speech pattern appears in Takahashi's debut work Katte na Yatsura, where the dappyamen add dappya at the end of all of their sentences. 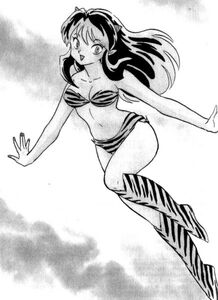 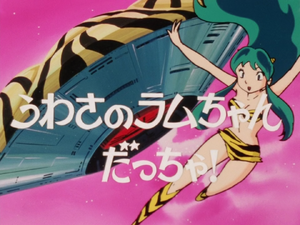 Lum in the title 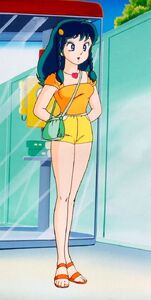 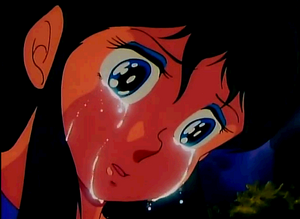 Lum crying
Add a photo to this gallery

Retrieved from "https://hero.fandom.com/wiki/Lum_Invader?oldid=1803398"
Community content is available under CC-BY-SA unless otherwise noted.