Loud trunk
Using his trunk as a vacuum

Playful Animal
Heffridge Trumpler Brompet Heffalump IV, simply known as Lumpy, is the titular character and one of the two main characters in Pooh's Heffalump Movie and in Pooh's Heffalump Halloween Movie and a supporting character in My Friends Tigger and Pooh. He is a real Heffalump discovered by Winnie the Pooh and his friends. Instead of being a nightmare, he is a friendly resident of the Hundred-Acre Wood. He is revealed he has an unnamed mother in the movie.

Immediately afterwards, Roo gets trapped under a piece of wood, and Lumpy calls for his mother to help him, which she does with the help of Pooh and friends. Lumpy then spends the rest of the day playing with Roo.

Lumpy is one of the two main s in the sequel. He is afraid of a new Halloween monster (Gobloon).

My Friend Tigger and Pooh

Lumpy makes his only 3D appearance in the TV series, My Friends Tigger and Pooh. He is a semi-regular character. 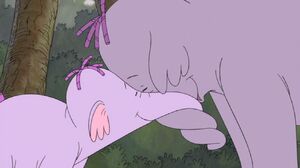 Lumpy and his mother 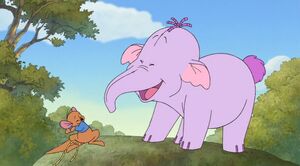 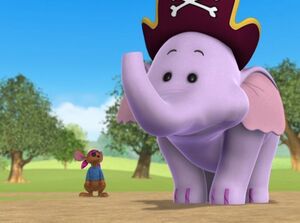 Retrieved from "https://hero.fandom.com/wiki/Lumpy_(Heffalump)?oldid=2300396"
Community content is available under CC-BY-SA unless otherwise noted.