Harry Potter and the Order of the Phoenix

Student at Hogwarts School of Witchcraft and Wizardry

Can produce a Patronus Charm

Telling others her theories.

Practicing Defense Against the Dark Arts with the rest of the DA.

Defend herself and Hogwarts against Lord Voldemort and his Death Eaters (succeeded).

Luna Scamander (née Lovegood) (born 13 February 1981) is a witch. She's the daughter of Xenophilius Lovegood and his wife Pandora Lovegood. Her mother accidentally died while experimenting with spells when Luna was nine, and Luna was raised by her father, editor of the magazine The Quibbler, in a rook-like house around the village of Ottery St. Catchpole. Luna attended Hogwarts School of Witchcraft and Wizardry from 1992 to 1999 and was sorted into Ravenclaw house. In her fourth year, Luna joined Dumbledore's Army, of which she became an important member.

She participated in the Battle of the Department of Mysteries in 1996 and the Battle of the Astronomy Tower in 1997, and co-led the reconstituted Dumbledore's Army when Hogwarts fell under the control of Lord Voldemort.

In the train, she discovered Harry Potter stranded in the train and his nose broken caused by Draco Malfoy, rescues him. When Draco taunted Harry's nose she realizes it was Draco Malfoy who was responsible for that, and fixes his nose before informing what happened to Hermione Granger, Ron Weasley and Prof. Horace Slughorn.

Because of her father's political dissidence at the time, Luna was abducted by Death Eaters to be held for ransom, and imprisoned in the dungeons of Malfoy Manor for months. She was freed by Dobby along with several other prisoners in the spring of 1998, and stayed at Shell Cottage until she returned to Hogwarts to participate in the final battle of the Second Wizarding War.

Later in life, Luna became a wizarding naturalist and eventually married Rolf Scamander (grandson of Newt Scamander), with whom she had two sons, Lorcan and Lysander. 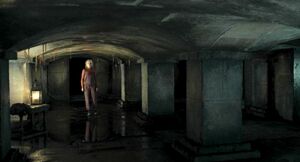 Retrieved from "https://hero.fandom.com/wiki/Luna_Lovegood?oldid=1822990"
Community content is available under CC-BY-SA unless otherwise noted.