Mentor
Luong Lao Shi (Lao Shi for short) also known as Gramps is the father of Susan Long, the father-in-law of Jonathan, the maternal grandfather of Jake and Haley, the former Chinese Dragon, and one of the main characters in American Dragon: Jake Long.

Lao Shi appears to be somewhat miniature, and has somewhat pointed ears. He has thinning white hair, thick eyebrows, a Fu Manchu mustache with a "soul patch" beard.

His usual clothing consists of a long-sleeved blue robe with yellow tips at the sleeves and hem.

In dragon form, Lao Shi has a long, serpentine body with blue scales, white spine ridges, a pair of horns, and the same hair in his human form. He has green eyes which over time appear black.

Lao Shi is usually level-headed and intelligent, with a vast knowledge of magical creatures and items. While usually one to approach conflicts in a calm and rational manner, he is also prone to angry outbursts filled with strings of rambling in Mandarin or Cantonese, usually brought on by the mistakes or misbehavior of Jake.

Lao Shi moves from his home in China to New York in order to train his grandson Jake for his job as The American Dragon and along with Fu Dog aids him in protecting New York and its magical creatures from evil such as The Huntsman and The Dark Dragon (the latter battled and was defeated by Lao Shi in 1975). 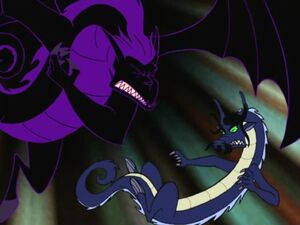 A younger Lao Shi battling The Dark Dragon in 1975 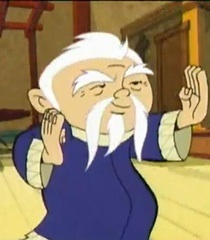 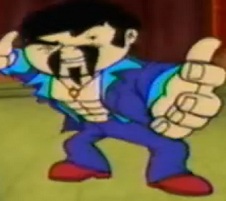 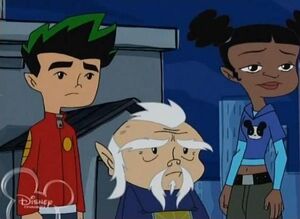 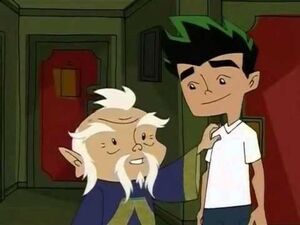 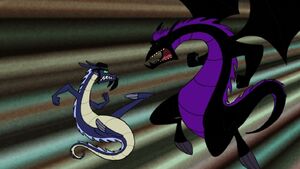 Retrieved from "https://hero.fandom.com/wiki/Luong_Lao_Shi?oldid=1828535"
Community content is available under CC-BY-SA unless otherwise noted.