Pure of heart
Lurleen Lumpkin is a beautiful country singer and a friend of Homer Simpson from the TV series "The Simpsons".

Homer discovered Lurleen in a bar in the middle of nowhere. She sang "Your Wife Don't Understand You" for the rowdy bar crowd, and Homer was amazed by her voice. He decided to help her launch a singing career, much to the chagrin of Marge. Lurleen was grateful to have someone helping her with her career, but she quickly started falling for Homer, and it came out in her song lyrics. First, she flirted with him in "Bagged Me a Homer," which angered Marge, but to which Homer remained oblivious. Then she made an open attempt to seduce him with a seductive song called "Bunk with Me Tonight." When Lurleen sang the song for him, it finally dawned on Homer that Lurleen was attracted to him. Later he had another epiphany, and suddenly realized that managing Lurleen could hurt his marriage, so he abruptly quit as her manager in the middle of a TV appearance, and went home. Saddened, but wiser, Lurleen then sang on the show a new song called "Stand By Your Manager," which she had written on the spot. Happily, Homer and Marge were able to make up before the show was over.

Lurleen enjoyed a brief period of success after Homer quit managing her. At what Kent Brockman described as the peak of her career, she appeared as a celebrity guest on The Muppet Show. Lurleen sang "Bunk with Me Tonight" for Kermit the Frog, which got him into trouble with Miss Piggy. After that, however, her career went into a downward spiral,and she started drinking heavily.She also never got over Homer, marrying and divorcing three times—with all of her ex-husbands, despite being from diverse ethnic backgrounds, bearing striking resemblances to Homer.

Lurleen was present during the opening of the Springfield Monorail, where she revealed to Kent Brockman that she had been to the Betty Ford Clinicand had "spent last night in a ditch."Lurleen was also seen at the Bowlarama as one-fourth of a bowling team called "The Home Wreckers," the other three members being Jacques Brunswick, Mindy Simmons and Princess Kashmir.

Lurleen resurfaced when Mayor Quimby  was aggressively rounding up citizens who owed back taxes, and was arrested. She pleaded to Judge Snyder that she couldn't afford to pay anything because all of her money was going to her ex-husbands, but Snyder was unmoved and ordered her to start paying her taxes. Homer and Marge promised to help her get her career back on track, and Marge helped reunite Lurleen with her deadbeat father. When her father betrayed her again (stealing one of her new songs), Lurleen retook control of her career and went on to open for the Dixie Chicks. She still didn't have all her personal issues resolved, though, as she fell for yet another man who resembled Homer. 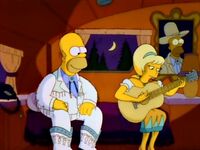 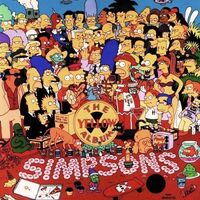 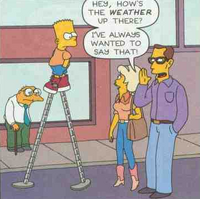 Lurleen as a zombie 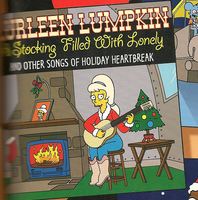 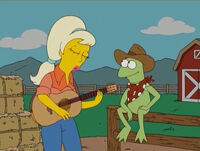 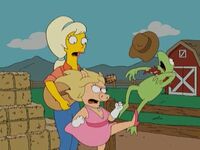 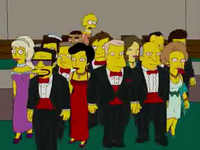 Lurleen Lumpkin in "The Simpsons Road Rage"
Add a photo to this gallery
Retrieved from "https://hero.fandom.com/wiki/Lurleen_Lumpkin?oldid=1542674"
Community content is available under CC-BY-SA unless otherwise noted.