President of the Aether Foundation

Taking back what was hers.
Finding Beauty.

Take back Cosmog and Type: Null.

Get revenge by fusing with Nihilego and unleash her "power".
Find a way to reach her husband who previously was sucked into an Ultra Wormhole many years ago.
Destroy Alola.
Kill the Player.
Eliminate all who is against her.
Defeat Necrozma (Ultra Sun and Ultra Moon version only; all failed).

Lusamine is the main antagonist in the Pokémon Sun and Moon game and a supporting character in the anime series and Pokémon Ultra Sun and Ultra Moon. She is the president of the Aether Foundation.

In the anime, she is voiced by Sayaka Kinoshita in Japanese version, and by Bobbi Hartley in English version.

Lusamine has blonde hair with silver streaks and green eyes. She wears a white dress with a diamond badge on it, black and white leggings, and boots of the same color, with green soles. Her boots have a medium-height yellow heel to them.

When Lusamine fuses with a Nihilego, she transforms into a dark-colored version of the Ultra Beast with her upper torso in the bell, her legs hanging out of the body and several eyes on her tentacles with gem-shaped pupils.

Lusamine was originally shown to be a kindhearted lady who is willing to "create a utopia for Pokémon". In truth, however, she seeks for beautiful things she could "own".

Though her daughter and son both try to warn her about the dangers, Lusamine cannot forgive them for betraying her, showing utter coldness, as she does not want anything to stand in her way to obtain the power from the Ultra Beasts.

Ultimately, she wishes to live in a world that consists only of her and Nihilego, which she views as a surrogate family that is completely obedient to her. She is also extremely manipulative, taking advantage of Guzma's inferiority complex to befriend him and convince him to serve as a hidden mercenary for the Aether Foundation.

Despite this, it is implied that Lusamine was a genuinely kind person at one time, but after her husband Mohn was lost in the Ultra Beast's world, the grief drove her insane. After her defeat and forceful separation from her Nihilego, she seems to regain some of her sanity and comments that she finds Lillie "beautiful," before collapsing into a coma.

The Ultra series portray her as a more decent person rather than a beauty obsessed villain she was in the Sun and Moon series. Her goals are more well intentioned, as she wanted to protect Alola from Necrozma and enlisted the help of the Ultra Recon Squad, and part of her goal is to find her husband, Mohn who disappeared in the Ultra Wormhole. However, she still takes extreme questionable measures to accomplish them. In this case, she was not infected by Nihilego at all.

When Lillie is later brought before her by Team Skull, Lusamine showed utter disappointment in her for stealing Cosmog from her and still vows to stop Necrozma through any means possible and eventually escapes with Guzma through the Wormhole she created with Nebby's power. Later, she was tossed out along with Guzma by Necrozma and warns the player and Lillie to get away after realizing how dangerous the Pokemon was. Her rash actions have seriously harmed the Ultra Recon Squad's trust in her. After the player defeats Necrozma (fused with Nebby, then called Dusk Mane/Dawn Wings Necrozma), light returns to Alola and Lusamine reconciles with Lillie and mother and daughter leave to tend to Nebby's wounds.

She later becomes the damsel in distress in the Rainbow Rocket Episode and Lillie and the player must defeat the team leaders of the past and reach Giovanni who is holding her captive. After he is defeated, Lusamine is saved and after that, she demotes Faba from his Branch Chief title to being just an intern for his treacherous involvement with Team Rainbow Rocket. 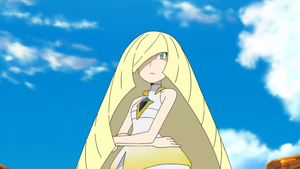 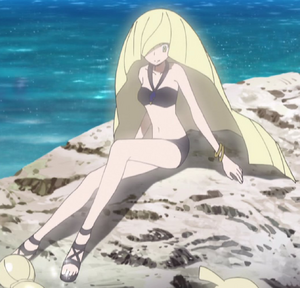 Lusamine in a bikini. 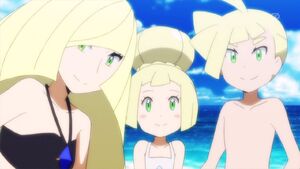 Lusamine, Lillie and Gladion at the beach. 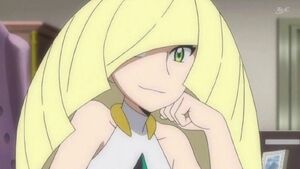 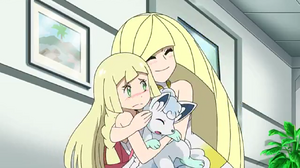 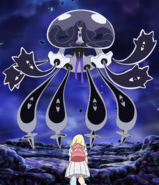 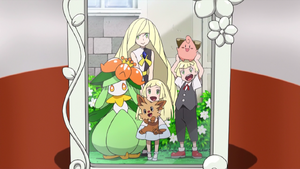