Luring men into doing her bidding.

Lust is one of the Seven Homunculi and a major antagonist in the 2003 anime adaptation of Fullmetal Alchemist, whose storyline radically differs from the manga. She's a resurrected version of an Ishvallan woman. Unlike her manga and 2009 anime counterpart, this version is portrayed with much more sympathy and remorse.

Lust claims to have first observed the Elrics while she was evaluating the potential of the alchemist Majhal to create a Philosopher's Stone. While she was always in the background, using those like Cornello or Mugear, Lust only revealed herself to the Elrics years later during the events of the 5th Laboratory, where she attempted to convince Ed into creating a true Philosopher's Stone. Lust doesn't introduce herself or Gluttony by name to Edward until they met face to face again in Lior. Even then, she only introduces herself intending to kill Edward immediately after.

She is often directly involved in encouraging humans to seek out the Philosopher's Stone, using their desire for the stone to her advantage. Once baited, the alchemists are molded into following whatever path that best suits Lust and the other Homunculi's designs. She also tends to be more involved with the intrigue side of various conspiracies. Lust was created by Scar's brother, when he attempted to use alchemy to bring his lover back from the dead. After he was cast out from Ishvalan society as a heretic, Envy visited the wretched creature and fed it red stones, giving her human shape, and her new name. She was not the first Homunculus to bear the name of Lust, and is the third youngest Homunculus, only Wrath and Sloth are younger.

While ruthless throughout most of the series, she changes near the end during the Lior incident as she begins to recover some memories of her life as a human, and she softens particularly towards Scar and the Elrics. But her involvement was reckless, and allowing the Elrics' escape–a locket containing strands of hair from the woman she "was" prevented her from action–raised doubts about her loyalty. Lust was taken to Dante, who gave her a chance to redeem herself by helping Wrath take out Edward while Sloth abducted Al. Finally realizing Dante's true intentions were never to make the Homunculi human, Lust defected from the Homunculi. After at first trying to kill Ed, Lust betrays Wrath and forms an alliance with Ed under the condition that he help make her human. In return, she would reveal to the Elrics the identity of her master. However, to save Sloth from the ambush Edward and Lust set up for her, Wrath uses the locket and the transmutation circle that Lust made for Edward to use on Sloth, immobilizes and kills her by transmuting his arm temporarily into a blade. Before her death, Lust wonders where she will go when she dies. As if the whole reason she wanted to become human so badly was so she could die and, ironically, her question is answered. She is the second Homunculus to die in the anime.

While her personality is mostly similar to her manga counterpart, this incarnation of Lust has a singular desire to become Human, which was revealed in the later half the series.

Because of this aforementioned desire, she is the second homunculus to rebel against Dante and has assisted Edward Elric if he can fulfill her promise. During her last moments before being killed by Wrath, Lust wonders where do homunculi like herself go when they die, while admitting that her reason for wanting to become Human was to experience "death". 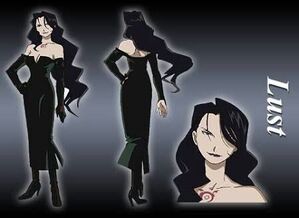