Luviagelita Edelfelt is a heroine from the Fate series debuting in Fate/hollow ataraxia. She is better known as Luvia in fandom.

In English version, she is formerly voiced by Shelley Calene-Black, who also voiced Mireille Bouquet in Noir, Yuriko Takagi in Highschool of the Dead, Ais Wallenstein in Is It Wrong to Try to Pick Up Girls in a Dungeon?, Nobara Yukinokōji in Inu x Boku SS, Najenda in Akame Ga Kill!, Ageha Chono in Wizard Barristers, Medaka Kurokami in Medaka Box, Canaan in Canaan, Cortana in Halo Legends, Kyou Fujibayashi and Yuki in Clannad, Tomika Amato in Maken-Ki!, Narvi Stryze in Break Blade, Rei Wakana in BanG Dream!, Rutile in Land of the Lustrous, Naomi in Girls und Panzer, Misery in Gate: Thus the JSDF Fought There, Anna in Sunday Without God, Saki Kirishima in Dream Eater Merry, Kuroko Smith in Monster Musume: Everyday Life with Monster Girls, and Lyza in Made in Abyss, and she is currently voiced by Lauren Landa, who also voiced Xenovia Quarta in Highschool DxD, Female Robin in Fire Emblem: Awakening, Kyoko Sakura in Puella Magi Madoka Magica, Leia Rolando in Tales of Xillia, Leixia in Soucalibur V, Litchi Faye-Ling in Blazblue: Calamity Trigger, Kasumi in Dead or Alive, Annie Leonhart in Attack on Titan, Mio Naruse in Shinmai Maou no Testament, Sailor Neptune in Sailor Moon franchise, Merlin in The Seven Deadly Sins, Lorelei in Pokémon Masters, Bulla in Dragon Ball Z Kai.

Luviagelita is the daughter of a distinguished lineage of magi, the Edelfelt, as well as their young and talented family head. As a student in the Clock Tower, the Mage's Association academy, she is one of the candidates for the position of student president for the current academic term.

She became acquainted with Rin Tohsaka after she began to study in the Clock Tower after the Fifth Holy Grail War. She finds in Rin a worthy rival due to their similarities; their encounters always result in fierce clashes. After a year together, a silent agreement was forged within the Department of Mineralogy of Clock Tower that "Tohsaka and Edelfelt must not attend classes together". The facade that she built for herself was withering away after a decade of use and her bad temper was already starting to appear, but after Rin showed up her daily life improved.

As long as Rin Tohsaka is not nearby, Luvia's attitude is always graceful, never blaspheming and displaying a beauty similar to that of a swan. Of course, that is all just a facade; as she is actually very competitive and suffers from perfectionist tendencies.

Although wealthy, Luvia does not tolerate excessive spending. However, she knows that such spending of money is meaningful because aristocrats are aristocrats. She understands that commoners do not have good views about the aristocrats, but loves them strongly because she understands them. She accepts that her fate is to marry a high-class gentleman of noble birth, but her personal tastes are more towards a simple man.

Luvia has long golden blond hair styled entirely in large coils. She physically resembles Rin somewhat, furthering speculation that the younger Edelfelt sister from the Third Holy Grail War may have married into the Tohsaka family.

A Finn who is an expert in the use of the Gandr shooting curse, she is also trained in the England-original Lancashire-style of martial combat (which is quite similar to pro-wrestling) and received the nicknames of "Hunting Dog of the Ring" and the "Forklift Lady" for it. Usually wearing a blue dress, the sleeves of said dress are optional attachments that can be easily and quickly removed in times of battle. 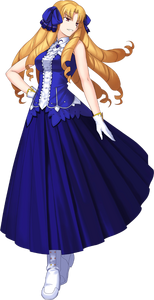 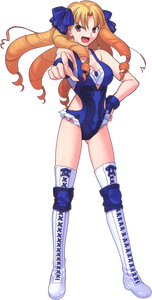 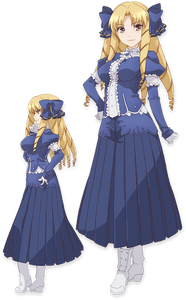 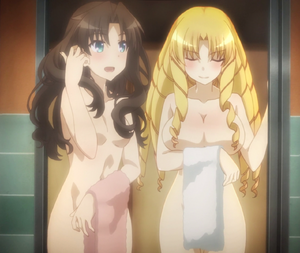 Luvia Edelfelt in bath and calls 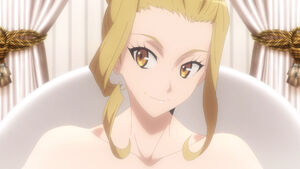 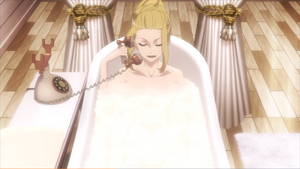 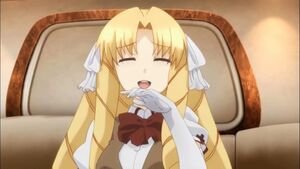