Using her magic to help others
Supporting other mages

Luxanna Crownguard, also known as her nickname Lux or the Lady of Luminosity, is a heroic playable champion in the MOBA game League of Legends. She is a Crownguard from Demacia, who was born with light magic. As Demacia is distrustful of mages, Lux keeps her powers secret and helps innocent mages avoid prosecution.

The 62nd champion added to the game, Lux was released on October 19, 2010. She is often played in the middle lane or a support.

Luxanna - or Lux as she prefers to be called - grew up in the Demacian city of High Silvermere alongside her older brother Garen. Like her brother, she was a heir to the the noble Crownguard family whom protected the king. While Garen was devoted to serving his country at an early age, Lux was forced to run her family's estates, which she was disinterested with. She was always curious and rebellious, wishing to find out what lied outside of Demacia's walls.

Magic was seen as evil in Demacian culture, ever since magic from the Rune Wars had nearly destroyed Valoran, and Lux's fear grew from the traumatic moment where her uncle was killed by a rogue mage. One night, she was attacked by a pack of sabrewulves and she ended up unleashing a spark of light, scaring them off. Lux became afraid of this revelation, worrying that the magic might corrupt her. She would practice her magic in private, and keep her abilities a secret from everyone.

When she was sixteen, Lux travelled with her parents Pieter and Augatha to witness Garen being accepted into the Dauntless Vanguard. Then they moved to Demacia's capital, which she admired due to being every aspect of the Demacia her family believed in. She learned about the Illuminators, a religious order who took care of the citizens and even secretly admitted mages. Lux believes that the Demacian way is not the only way, and it would be better if Demacia became more accepting of mages like herself.

Lux once found out about a criminal named Sylas who was locked in a Demacian mage prison. She would regularly sneak out at night and negotiate with the guards of Sylas' cell to talk to him, where he would talk about his past and help Lux control her magic in exchange for giving him information. They became trusted friends, with Sylas affectionately calling her "Little Light". He eventually learned that petricite (the stone used in Demacian technology and architecture that stops magic) instead stored magic and was able to release all of it when overloaded with excessive amounts of magic. All he had to do was to touch Lux again to absorb her magic into his shackles.

Eventually, Lux and Sylas' secret meetings were found out and Sylas was sent to be executed. Lux tried to stop the execution by reasoning that Sylas was a human being and deserved better than being ostracized for his powers. Sylas apologized to "Little Light" before touching her and unleashing a blast of magic that killed many people on the scene.

Sylas freed the mages locked in the prison and formed a dangerous riot that endangered many lives. He planned to destroy the king's castle (since it was completely made out of petricite) and publicly humiliate King Jarvan III, but to everyone's shock the king had already been killed. He decided to humiliate his son Jarvan IV instead, but Lux stopped him by firing a crossbow at him. Sylas was shocked by his only friend turning on him, but Garen engaged in combat with him. Sylas managed to defeat Garen, but Lux begged him to spare her brother. He accepted Lux's request and left Demacia alongside the escaped mages via the sewer system.

Demacia was never the same after that, with Jarvan IV rescinding the trust that his father had for mages and supporting the service of the Mageseekers. Lux found a family of mages who were initially afraid that she would sell them out, but she gained their trust and guided them to the Demacian sewers. Just as they ran into a cave-in near the exit, Garen found Lux and was disappointed in her. With no other option, Lux used her magic in front of her brother to free the mages. He accepted that Lux was a mage, but also a Demacian, so he would support her services to save the other mages from conflict.

Lux presents an energetic and optimistic disposition, being happy and finding humor all the time. However, in more serious situations, Lux's facade drops and she turns out to be constrained and worried about her magic and being found out. She wishes for mages to be accepted in Demacia and opposes the Mageseekers' prosecution of them just because of their powers, sympathizing with Sylas for being unfairly imprisoned. When he betrayed her and started the rebellion, Lux saw him as the danger he truly was, though since the rebellion she has decided to help innocent mages secretly escape Demacia and join Sylas' camp, since being under his rule would be better than being trapped in a nation which saw them only as criminals.

Lux as she appears in Legends of Runeterra. 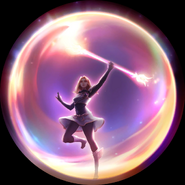