Lydia is a Nord housecarl obtained upon completion of the quest "Dragon Rising". She obtains the title of the Dragonborn's Housecarl upon defeating a dragon located outside the city of Whiterun. As Housecarl, she is sworn to protect the Dragonborn with her life, and to carry their burdens.

She was voiced by Colleen Delany.

She first appears after the Dragonborn defeats the dragon Mirmulnir located outside Whiterun at the Western Watchtower, and learns of Dragonborn's true identity. Afterwards, Jarl Balgruuf the Greater will reward the Dragonborn for their actions by presenting them the title of Thane, as well as Lydia as their housecarl.

Afterwards, she often plays the role of the Dragonborn's follower, and will carry out any burdens he/she requests. She is considered to be the first follower by beginners of the game, as she is usually (though not always) the first one available to them.

Just like other followers, Lydia can die if she does not get the opportunity to heal herself when knocked down. This can happen if the Dragonborn damages her at low health. If the Dragonborn and Lydia part ways, she returns to Dragonsreach. If Breezehome in Whiterun is owned, she will return there instead. If enough time was spent with her, she may gift the Dragonborn with a radiant item upon reuniting with her.

Lydia, like most followers, has the option of being recruited into The Blades by being brought to Delphine at Sky Haven Temple after the quest Alduin's Wall is completed. She can still be recruited as a follower, but her default Steel apparel will be replaced with a full set of Blades Armor and a Blades sword. This change is permanent.

Before Patch 1.5, it was only possible to marry Lydia through console commands. If the Dragonborn does marry her, then she opens a shop in town and gives the Dragonborn 100 gold per day. She can be asked to move to a different house, if a house other than Breezehome is owned.

Like all the other candidates for marriage, she will cook a Homecooked Meal once a day that regenerates Stamina, Health, and Magicka. She can only be married once Breezehome has been purchased

Lydia is primarily a melee-type character and uses no spells. As with some other melee-oriented followers, she has tendency to simply rush into combat, possibly leading to her death.

She can use spell scrolls and staves, potions and food if available, and favors Heavy Armor and One-Handed weapons, but will use any equipment if it bests the current base armor or damage rating.

Lydia's default armor is steel armor (the version without pauldrons), boots, gauntlets, and shield. Her default equipment provides a total armor rating of 169. She does not wear a helmet by default, but can equip any if given one.

She can also wear any ring or necklace given to her by the Dragonborn, which can be useful due to the added effects these items may have. She can equip armor given to her, if its armor rating surpasses that of her default equipment. She can and will wear light armor, but her high Heavy Armor skill makes it difficult without a high Smithing skill or high-end armor, or the "equipitem" console command.

It should be noted that, similar to other followers, there are multiple options to change her gear. She may be dismissed then pickpocketed to remove her default gear using the Perfect Touch Pickpocket perk. Alternatively, she may be married so that she opens a shop — this then allows the Dragonborn to buy her default clothes, which forces her to wear alternative gear.

She only uses a shield if the best melee weapon in her inventory is One-Handed, otherwise she uses a Two-Handed weapon. Lydia's default weapon is a steel sword. If her sword is removed or if opponents are out of melee range, she uses a hunting bow, with an infinite supply of iron arrows, though these arrows cannot be taken from her inventory. Similar to her melee weapon and armor, she can be given stronger arrows and a stronger bow, which she will use instead. 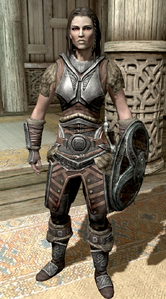 This article contains content derived from the "Lydia" article on the Elder Scrolls Wiki, licensed under CC-BY-SA.