Teenage Heroine
Lydia Deetz is the tritagonist of the 1988 film, Beetlejuice.

She is portrayed by Winona Ryder in the film, who also played Kim Boggs in Edward Scissorhands and Elsa Van Helsing in Frankenweenie, both films directed by Tim Burton, Veronica Sawyer in Heathers and Joyce Byers in Stranger Things.

Lydia is shown with jet black hair which she often wears in a bushy ponytail with long parted bangs. She has brown eyes and wears pale face makeup and peach eye shadow around her eyelids, under her eyebrows and above her cheekbones.

Lydia is a serious, but kind girl who is sensitive beyond her goth dress and feels isolated in the world. Her father and step-mother do not take anything she says seriously and often ignore her for their own selfish pursuits. Lydia loves writing poetry, taking photographs, and loves anything pertaining to the supernatural and paranormal. Despite her young age, Lydia appears to be the most sensible member of the Deetz household. By the end of the film, she is more happy and well-adjusted because Adam and Barbara Maitland become active parental figures alongside Charles and Delia Deetz, who take a stronger role in her upbringing after having seen her nearly forced into marriage with Betelgeuse.

Her family, arrive from New York City. Charles Deetz is a former real estate developer; his wife Delia, a sculptor; and his goth daughter Lydia, from his first marriage, is an aspiring photographer. Under the guidance of interior designer Otho, Delia begins to transform the house into a posh modern art piece.

While the Maitlands are away seeing Juno, Lydia discovers the handbook and reads it. Although Adam and Barbara remain invisible to Charles and Delia, Lydia can see the ghost couple and befriends them.

Otho had unwittingly performed an exorcism instead. Horrified, Lydia begrudgingly summons Beetlejuice for help; but he agrees to help her only on the condition that she marry him, enabling him to freely cause chaos in the mortal world. Beetlejuice saves the Maitlands and disposes of Maxie, his wife, and Otho, then prepares a wedding before a ghastly minister. The Maitlands intervene before the ceremony is completed, with Barbara riding a sandworm through the house to devour Betelgeuse.

Finally, the Deetzes and Maitlands agree to live in harmony within the house. Meanwhile, Adam, Barbara, and Lydia are seen in a remodeled part of the house dancing to Harry Belafonte's "Jump in the Line" (with Lydia floating in the air) to celebrate Lydia getting an "A" on her math test at school. 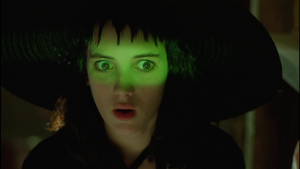 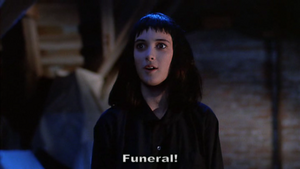 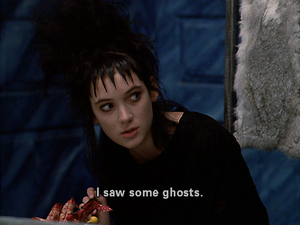 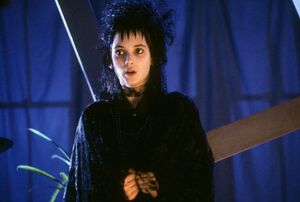 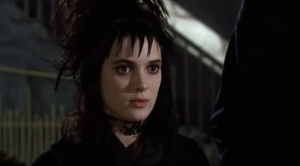 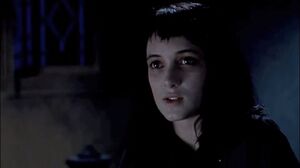 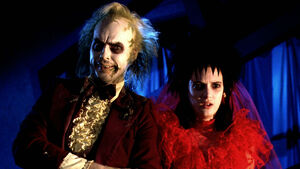 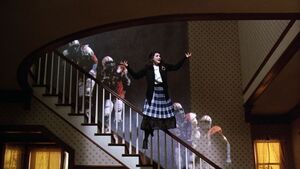