Being popular and maintaining her image (formerly).
Protecting her loved ones and friends.

Lydia Martin is one of the main characters who was the minor antagonist of the MTV supernatural drama Teen Wolf.

A highly intelligent teenager, Lydia puts on a façade of being a mean girl at her high school before learning of the supernatural world in Beacon Hills. She would become a member of Scott McCall's wolf pack, and later learned that she was a banshee, allowing her to predict when someone's death via premonitions. Though Lydia first appeared to be shallow and manipulative, she would show her compassionate and caring side as the series progressed. She would developed bonds with her friends Allison Argent and Scott McCall, but her strongest was with Stiles Stilinski, who would become her boyfriend by the end of the series.

She was portrayed by Holland Roden.

Lydia Martin was the Teen Wolf mean girl and Queen Bee. Lydia has developed quite a bit since she met and befriended Allison Argent, Scott McCall, and Stiles Stilinski.

She was, on the surface at least, shallow and spoiled but this turned out to be an elaborate act to hide the fact that she possesses a genius level IQ. She is well versed in chemistry and understands both classical and archaic Latin.

The ruse, along with her relationship with Jackson Whittemore, was part of a carefully orchestrated plan to maintain her popularity at Beacon Hills High.

Lydia was manipulative with her friends, using them whenever it suited her ambitions.

As the supernatural elements began to close in though, her carefully crafted facade began to fall apart. After being attacked at the winter formal, she found herself haunted by her attacker. She was later able to show her true love for Jackson and it was that love which saved his life.

Jackson's abrupt move to London, England seemed to leave Lydia emotionally numb. She returned to her "just on the surface" existence and took a number of lovers over the summer, expressing a "love them and leave them" philosophy.

When supernatural threats arose again, Lydia found herself drawn to gruesome murder scenes again and again. She learned she was a Banshee and decided to use her abilities for the greater good... if she can figure out how to actually use her abilities.

She fell in love again too. While she had entered into a purely physical relationship with Aiden to aid her friends in defeating the The Alpha Pack, she developed deeper feelings. She once again suffered genuine heartbreak when Aiden was killed.

Although her feelings may not be as strong for Stiles, they have developed a strong and caring friendship. By the end of the series, Lydia and Stiles fall in love, and begin a romantic relationship

Lydia Martin was born in mid-March 1994, to Mr. and Natalie Martin, and attended Beacon Hills High School since she was young. According to Stiles, he has had a crush on her since the third grade, and knew of Stiles and Scott McCall, but didn't become friends with them until the events of series. She spent much of her youth being with her grandmother, Lorraine, who read The Little Mermaid, one of her favorite books.

Eventually, Lydia lost contact with Lorraine, who was sent to the Eichen House, believing that she was mentally ill. In reality, Lorraine was a Banshee, who had premonitions and could hear voices and sounds. One day, she performed trephination on herself while in the bathtub, causing Natalie to go, and tell Lydia to stay in the car. Lydia entered the Eichen House anyway, and saw Lorraine surrounded in a pool of blood, and she repressed the memory for years.

Lydia's family life became strained, as her parents divorced, and Lydia decided to stay with her mother. Her parents' constant arguing effected her behavior, and likely started her mean-girl personality in high school. Despite this, Lydia was highly intelligent and showed leadership skills, and even had her IQ tested, with it being 170. Though intelligent, she put on a mean girl façade that made her the "queen bee" of Beacon Hills High. Before the events of season one, Lydia became a romantic relationship with Jackson Whittemore, who was the captain of the lacrosse team. Though Lydia loved Jackson and supported him, she would often pretend to be ditzy to make Whittemore feel less insecure.

Lydia would meet the new girl Allison Argent, and decided to have be her best friend while introducing her to the popular crowd in Beacon Hills. While watching the lacrosse team, Lydia and Allison were impressed by Scott McCall, who had recently been bitten by a werewolf the night before. After Scott hurt Jackson during practice, however, she decided to introduce Allison to Jackson's lacrosse teammates after hearing that McCall wouldn't play in their next game. She also convinced Jackson to get another cortisone shot before the game, stating if he wanted to "go pro" or not. Though she attempted to support Jackson during the game, she became more impressed with Scott at the game. The following day, Lydia sat with Scott and Stiles at the lunch table with Jackson, Allison, and Danny Mahealani to discuss about the animal attack in the school bus. During the course of the discussion, Lydia corrected Jackson and Danny's question on if it was a mountain lion or a cougar, telling them that cougars are mountain lions.

During a double date with Allison and Scott, Lydia played bowling and showed herself to very talented, and retorted Argent's statement about her dynamic with Jackson. She later witnessed an werewolf attack a video store, and became stressed by the incident that she decided not to go to school. Stiles arrived at her home to speak with her about what she saw, and only got little since Lydia was still traumatized from the experience. After recovering, Lydia became interested in learning what she saw after Allison showed her a picture of La Bête du Gévaudan. Allison, Lydia, and Jackson then received a text message from "Scott" (who was really the alpha) to meet at the high school, and found Scott and Stiles trapped there. Lydia proved herself useful by making molotov cocktails to help them fight the alpha, who Scott and Stiles said was Derek, lying to the group that he was a serial killer. The group were later released from the school by Alan Deaton.

Lydia would learn that Allison decided to break up with Scott, and told Argent that it was a good thing, but she said this since she had become attracted to McCall. Lydia later lured him into Coach Finstock's office and kissed him, and he kissed her back due to the impending moon affecting his personality. Later on, Jackson broke up with Lydia via text, but she shrugged it off and learned that Allison was going to the winter formal with Whittemore as friends. Lydia would apologize to Allison for kissing Scott, and did so by buying her a dress for the formal, and agreed to go with Stiles when Argent suggested it. At the formal, she was attacked by the alpha Peter Hale, but was saved by Stiles, begging Hale to stop attacking her. She was taken to the hospital, where her wounds healed, much to Scott's confusion.

Though Lydia survived the ordeal, she suffered from hallucinations that were caused by Peter, who's bite allowed him to semi-possess due to her banshee heritage. Returning to school, she thanked Jackson for saving her, but he rejected her since it was waiting to transform into a werewolf since he was bitten by Derek. Jackson believed that Lydia was going to transform as well, but found that she was somehow immune, making him believe that she was the reason he hadn't turned. 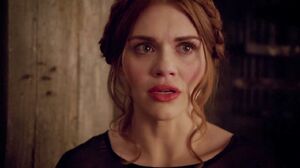 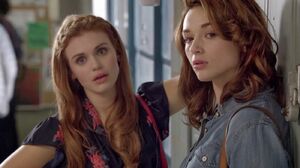 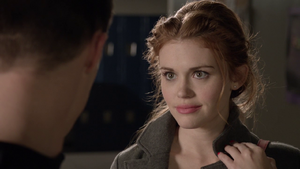 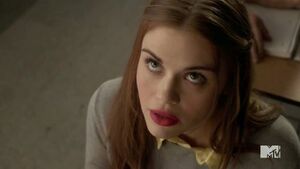 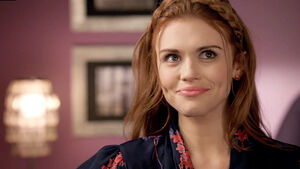 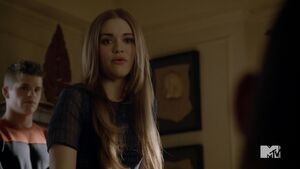 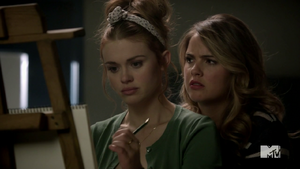 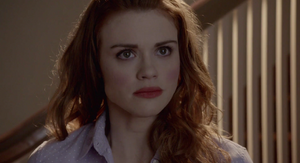 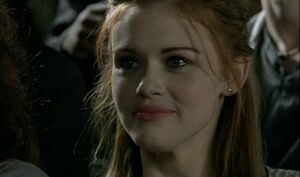 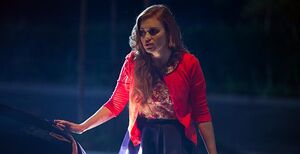 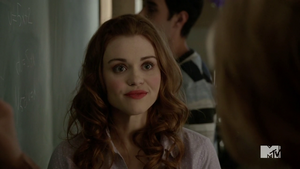 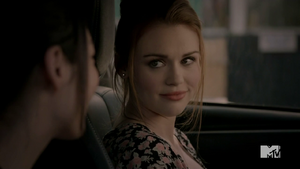 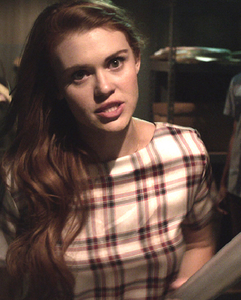 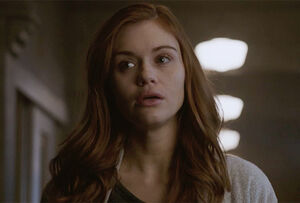 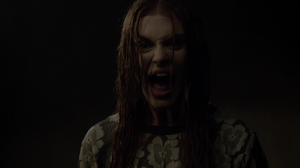 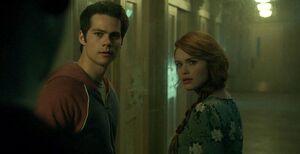 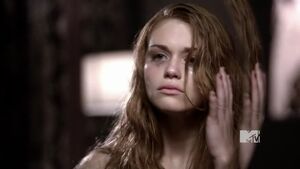 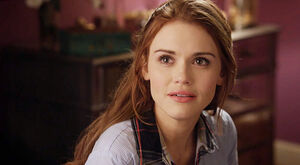 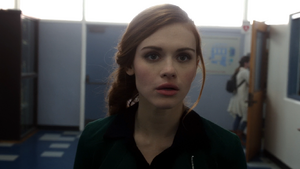 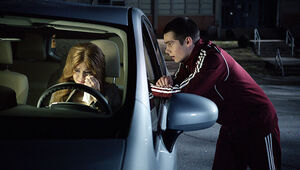 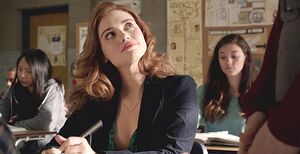 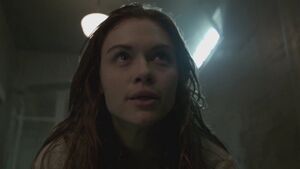