Monster Tamer
Lyra (Japanese: コトネ Kotone) is the female playable character in the Pokémon HeartGold and SoulSilver. Her male counterpart is Ethan. She replaces Kris as Ethan's female counterpart. 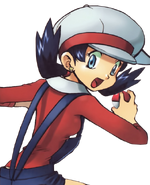 Crystal, Lyra's manga counerpart (She is also Kris's counterpart)
Add a photo to this gallery

Retrieved from "https://hero.fandom.com/wiki/Lyra?oldid=1741135"
Community content is available under CC-BY-SA unless otherwise noted.