Intelligence Agency/Bigger Good
The Secret Intelligence Service (SIS), more commonly known as MI6 (originally Military Intelligence Section 6), or the Secret Service or simply Six, is the United Kingdom's external intelligence agency. SIS is responsible for the United Kingdom's espionage activities overseas, as opposed to the Security Service (MI5) which is charged with internal security within the UK. The Republic of Ireland also falls within MI5's remit. It was founded in October 1909 (along with MI5) as the Foreign Section of the Secret Service Bureau.

Acting as the employer of Commander James Bond, the Secret Intelligence Service is first introduced in Ian Fleming's 1953 debut novel Casino Royale, referred to simply as the "Secret Service", and appeared in almost every subsequent story in the James Bond franchise. Fleming's SIS typically operates under the cover-name "Universal Exports" and is comprised of subsections such as the 00 section and their research and development division, Q Branch.

The Secret Intelligence Service is first introduced in Ian Fleming's 1953 debut novel Casino Royale, referred to simply as the "Secret Service". The service is said to operate out of an "office building near Regent’s Park" and is headed by Sir Miles Messervy, who like George Mansfield Smith-Cumming, goes by the initial M. The service is further fleshed out in the 1955 novel Moonraker, in which it is mentioned that the "Universal Export Co." is the cover for the Secret Service's offices in London. Along with other fictional businesses "Radio Tests Ltd.", "Delaney Bros. (1940) Ltd" and the "Omnium Corporation" they occupy the "big, grey building near Regents Park".[13]

Fleming's British Secret Service had its silver screen debut in EON Productions' 1962 film adaption of Dr. No. Notably, there is some discrepancy between the names given for James Bond's employer. When contact with the Secret Service's Jamaican station abruptly ceases, the Foreman of signals in their London radio room contacts "MI6 radio security control". However, when Bond's superior M gives his title, he describes himself as "Head of MI7". Strangely, the dialogue referring to "MI7" appears to have been the result of later dubbing, as the speaker's lips clearly say "MI6". In addition, the closed-captioning on the DVD release still says MI6. [14] It is unclear whether the radio control station featured at the beginning of Dr. No is intended to represent the Secret Service's headquarters, however by 1969's On Her Majesty's Secret Service its general location would be Whitehall, London.

From the 1995 film GoldenEye onward, the agency is consistently identified as "MI6" and is located for the most-part at the recently constructed real-world headquarters of SIS, the SIS Building at Vauxhall Cross in London. In 1999's The World Is Not Enough, its base of operations would temporarily move to a Scottish castle following a terrorist attack on the SIS Building orchestrated by the anarchist Renard. The Secret Service's designation and headquarters would carry over from the Pierce Brosnan era into the 2006 reboot of the James Bond film franchise (despite a peculiar temporary relocation in Quantum of Solace), until the building's destruction at the hands of Raoul Silva in Skyfall (2012) and its demolition in Spectre (2015). Following the events of Skyfall the bulk of MI6 (including M's office) would relocate to Whitehall, with their quartermaster choosing to operate from an underground workshop, accessible via a river-side tunnel beside the Millbank Millennium Pier.

In Ian Fleming's James Bond novels and the derived films, the 00 Section (or later in the franchise 00 Division) of MI6 is considered the secret service's elite. A 00 (typically read "Double O" and denoted in Fleming's novels by the letters "OO" rather than the digits "00") agent holds a licence to kill in the field, at his or her discretion, to complete the mission. The novel Moonraker establishes that the section routinely has three agents concurrently; the film series, beginning with Thunderball, establishes the number of 00 agents at a minimum of 9, with the likelihood of more. Standard mandatory retirement age is 45 though various writers including Ian Fleming, Sebastian Faulks and John Gardner have contradicted this as a matter of Poetic License. Although Fleming only mentioned five 00 agents, others have been added over the years across various franchise media.

Q Branch (or later in the franchise Q Division) is the fictional research and development division of the British Secret Intelligence Service (SIS/MI6). The branch is dedicated to developing tools for agents to use on the field.

Universal Exports is a organization that covers up the identity of MI6 to conceal the agents by importing some stuff in order to not get exposed by terrorists. 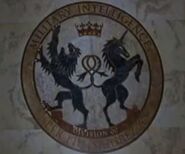